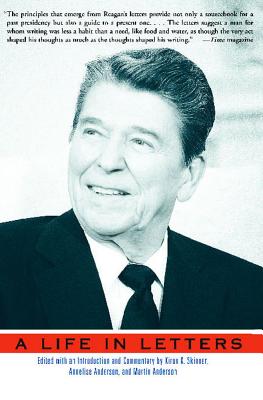 A Life In Letters

The New York Times bestselling collection of Ronald Reagan’s letters—a definitive look at a man, an era, and a presidency.

Ronald Reagan may have been the most prolific correspondent of any American president since Theodore Roosevelt, having likely written more than 10,000 letters in his lifetime to a wide array of friends and family, politicians, private citizens, and children. Honest, open, and heartfelt, Reagan’s letters reveal a man who felt most comfortable and natural with pen in hand, and a man who reached out to friend and foe alike throughout his life. Reagan: A Life in Letters is as important as it is astonishing and moving.