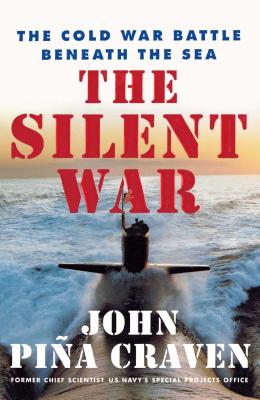 The Cold War Battle Beneath the Sea

Packed with the technological details and insights into military strategy that fans of Tom Clancy relish, The Silent War is a riveting look at the darkest days of the Cold War. It reveals, in gripping detail, the espionage, innovative high technology, and heroic seafaring the United States employed against the Soviet Union in the battle for nuclear and military supremacy. John Pi?a Craven, who shared management responsibility for the submarine-borne Polaris missile system, captures the excitement and the dangers of the times as he recounts the true stories behind some of the century's most shocking headlines and reveals harrowing episodes kept hidden from the public.
Craven describes for the first time the structural problems that almost caused the destruction of the Nautilus, the world's first nuclear-powered submarine, and presents startling information about the race to recover a hydrogen bomb from the B-52 bomber that went down off the coast of Spain. In a report no fan of The Hunt for Red October will want to miss, he provides a fascinating, authoritative perspective on the Navy's reaction to the rogue Soviet submarine and its mission.
A major contribution to Cold War history and literature, The Silent War will appeal to military buffs and fans of nonstop adventure thrillers alike.

Praise For The Silent War: The Cold War Battle Beneath the Sea…

Theodore L. Gaillard, Jr. Proceedings of the U.S. Naval Institute A must-read for those interested in the technology, management, and intelligence-gathering challenges triggered by tense Cold War competition beneath the seas...Remarkable.

John Piña Craven was the chief scientist of the Navy's Special Projects Office from 1958 to 1970 and won two Distinguished Civilian Service Awards. He later worked as director of the Law of the Sea Institute and is currently president of the Common Heritage Corporation. He lives in Honolulu, Hawaii.
Loading...
or support indie stores by buying on