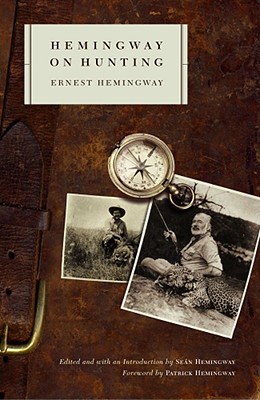 Ernest Hemingway's classic writings on hunting—one of his greatest passions—brought together in one volume, a must-have for any fan of Hemingway or hunting.

Ernest Hemingway’s lifelong zeal for the hunting life is reflected in his masterful works of fiction, from his famous portrayal of an African safari in “The Short Happy Life of Francis Macomber” to passages about duck hunting in Across the River and Into the Trees. For Hemingway, hunting was more than just a passion—it was a means through which to explore our humanity and man’s relationship to nature. Courage, awe, respect, precision, patience—these were the virtues that Hemingway honored in the hunter, and his ability to translate these qualities into prose has produced some of the strongest accounts of sportsmanship of all time.

Hemingway on Hunting offers the full range of Hemingway’s writing about the hunting life. With selections from his best-loved novels and stories, along with journalistic pieces from such magazines as Esquire and Vogue, this spectacular collection is a must-have for anyone who has ever tasted the thrill of the hunt—in person or on the page.

Praise For Hemingway on Hunting…

“Hemingway at his purest. . . artfully spare, gracefully descriptive, and faithful to his professional commitment.”—The Washington Post

“[A] trophy-sized catch to enjoy in and out of season.”—Library Journal