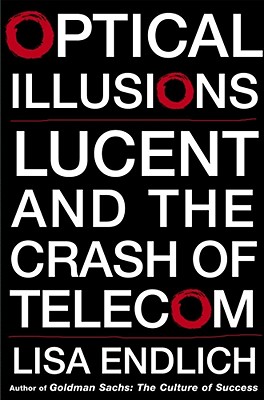 Lucent and the Crash of Telecom

When Lucent Technologies was spun off from AT&T in 1996, the new company was full of promise. An old-line manufacturer, it quickly became a sizzling hot stock thanks to the emergence of the Internet and the build-up of telecommunications. The stock market was soaring, and Lucent flew with it. Within a few short years it became the sixth-largest corporation in America and the most widely held stock in the country. Yet only months later, Lucent was gasping for life, victim of the greatest stock-market bubble in history.
Optical Illusions is the story of a financially sound company steeped in world-class talent, dominant in one of the fastest-growing industries, that in the space of two years found itself downgraded to a junk-bond credit rating, under investigation by the SEC for its accounting practices, the value of its stock reduced to the price of a cup of coffee. Lisa Endlich tells the fascinating tale of the company that epitomized the misfortunes of the telecom industry, leaving investors and employees shocked and confused.
In writing this book Endlich had access to more than a hundred people who played a role in the drama, as well as previously sealed courtroom documents. She explains how the conflicting styles of CEOs Henry Schacht and Rich McGinn contributed to Lucent's woes, and she shows how the loss of skilled executives such as Carly Fiorina hurt the company at a crucial moment. When it was all over, Schacht -- Lucent's first CEO, who was later brought back to right the listing ship -- acknowledged that Lucent had allowed itself to be swept up in the market mania, distorting its corporate values in the process.
Although the stock-market mania of the late 1990s is remembered as the Internet craze or the dot-com madness, as Optical Illusions shows, the damage was more widespread and lasting. In fighting for its survival, Lucent laid off more than 70 percent of its employees, wrecking retirees' savings and investors' portfolios alike.