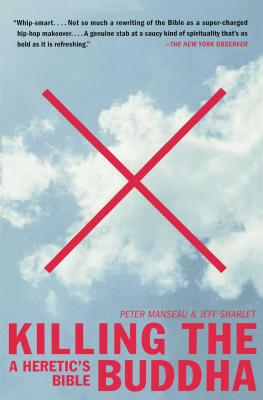 Now in paperback -- the book that caused a religious and critically acclaimed stir. Publishers Weekly called it the most original and insightful spiritual writing to come out of America since Jack Kerouac first hit the road. The Buffalo News hailed it as one of the most eccentric and fascinating books of the year. O, The Oprah Magazine said This collection proves that fear and trembling are human, but a sense of humor is divine.
Peter Manseau and Jeff Sharlet have created a work of calling that is as odd, moving, and inspiring as the people and the scriptures they encountered. Whether it is Manseau and Sharlet telling their psalms from outposts as unexpected as a strip club or a cattle-auction barn, Peter Trachtenberg unraveling the Gordian logic of Job via the Borscht Belt, Rick Moody finding a modern-day Jonah in Queens, or Haven Kimmel shocking and thrilling us with her Revelation, what emerges is not an attack on religion, but a quizzical, fascinating look at it from the inside. Killing the Buddha is a positively riveting look at the facets of true belief.

Praise For Killing the Buddha: A Heretic's Bible…


Whip-smart....Not so much a rewriting of the Bible as a super-charged hip-hop makeover....A genuine stab at a saucy kind of spirituality that's as bold as it is refreshing.


Quirky, far-ranging....With a format as complex as many people's relationship with God, it shouldn't work, but it does -- a literary leap of faith.


A heartfelt meditation on and exploration of contemporary religious practice in the United States...an intriguing work that is unafraid of controversy.