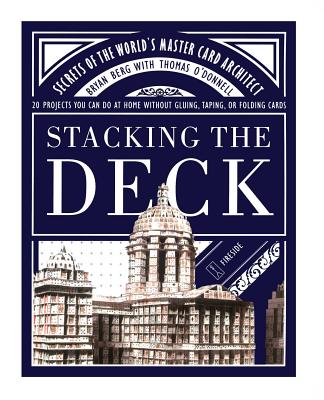 Written by the holder of several Guinness World Records for cardstacking, this is the first complete, fully illustrated guide to the art of building mind-boggling, multilevel structures with ordinary playing cards.
In Stacking the Deck, Bryan Berg reveals the secret to successful cardstacking with his simple four-card-cell structure and expanded grid techniques. Using illustrations and step-by-step instructions, he guides readers on to more elaborate -- and incredibly strong -- creations. He covers a wide range of architectural styles, from classic to whimsical, and various types of structures, including pyramids, shrines, stadiums, churches, an oil derrick, and even the Empire State Building. Since first setting the height record in 1992, Bryan's built awe-inspiring card models of a Japanese shrine, the Iowa State Capitol building, Ebbets Field, and his latest tower, which is more than twenty-five feet tall This book includes photographs of some of these amazing pieces, illustrating just how appealing and enduring a "house of cards" can be. Stacking the Deck will inspire everyone from youngsters experimenting with their first deck of cards to adults, who can create their own private skyscrapers.
Once you've read Stacking the Deck, you'll never look at a deck of cards the same way again.

Bryan Berg broke the Guinness World Record for card structures in 1992 at the age of seventeen with a tower fourteen feet, six inches tall. His latest record-holding structure is more than twenty-five feet tall. Touring regularly, Berg has stacked cards in virtually every major U.S. city and in Japan, Denmark, and Germany. He has also appeared on CBS, ABC, CNN, and Fox. Berg has been on the architecture faculty at Iowa State University for three years, and is earning a Master of Design at Harvard's Graduate School of Design.
or support indie stores by buying on
Copyright © 2020 American Booksellers Association