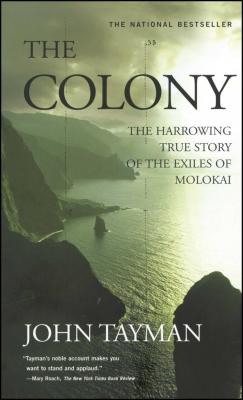 The Harrowing True Story of the Exiles of Molokai

In the bestselling tradition of In the Heart of the Sea, The Colony, “an impressively researched” (Rocky Mountain News) account of the history of America’s only leper colony located on the Hawaiian island of Molokai, is “an utterly engrossing look at a heartbreaking chapter” (Booklist) in American history and a moving tale of the extraordinary people who endured it.

Beginning in 1866 and continuing for over a century, more than eight thousand people suspected of having leprosy were forcibly exiled to the Hawaiian island of Molokai -- the longest and deadliest instance of medical segregation in American history. Torn from their homes and families, these men, women, and children were loaded into shipboard cattle stalls and abandoned in a lawless place where brutality held sway. Many did not have leprosy, and many who did were not contagious, yet all were ensnared in a shared nightmare.

Here, for the first time, John Tayman reveals the complete history of the Molokai settlement and its unforgettable inhabitants. It's an epic of ruthless manhunts, thrilling escapes, bizarre medical experiments, and tragic, irreversible error. Carefully researched and masterfully told, The Colony is a searing tale of individual bravery and extraordinary survival, and stands as a testament to the power of faith, compassion, and the human spirit.

Praise For The Colony: The Harrowing True Story of the Exiles of Molokai…

"A fascinating book about disease and the startling responses to it, ranging from terror to love." -- Paul Theroux

"Riveting. Tayman can stand toe-to-toe with Erik Larson (Devil in the White City) in his ability to weave meticulously researched material into a fascinating narrative. He certainly can keep a reader up at night." -- Detroit Free Press

"Impressively researched . . . at once eye-opening, shocking, and inspiring . . . the kind of book readers are sure to tell their friends about." -- Rocky Mountain News

John Tayman is editor at large of Men's Health. The former deputy editor of Outside magazine, he is an award-winning editor and writer, and has served as executive editor of New England Monthly, editor at large of Men's Journal, and contributing editor to Life, GQ, People, Business 2.0, and other publications. He lives in Northern California. Visit his website at www.johntayman.com.
Loading...
or support indie stores by buying on