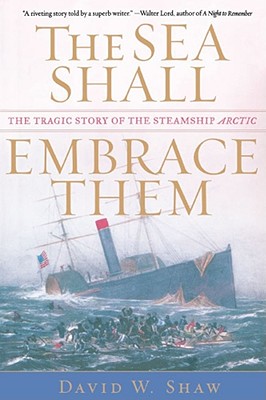 The Sea Shall Embrace Them (Paperback)

The Tragic Story of the Steamship Arctic

The 1854 collision at sea between the American ship Arctic and the Vesta, a much smaller French steamship, set in motion one of the most harrowing events in maritime history. David W. Shaw has based this fascinating account on the firsthand testimony of the few who survived the wreck, including the Arctic's heroic captain, James C. Luce, who was forced to fight his mutinous crew as they took the lifeboats and left hundreds of passengers to suffer a cruel and painful death. Not only did 400 people -- including Luce's own frail son -- die by daybreak, but the wreck also ended the domination of the seas by the American maritime fleet for the rest of the nineteenth century.
Utterly compelling, The Sea Shall Embrace Them is a stirring slice of heretofore little-known American history. Beautifully written, it puts the reader on deck as a ship full of men, women, and children do battle both with a mighty ocean and with their own baser instincts.

A journalist for nearly twenty years, David W. Shaw has written extensively about nineteenth-century American history in four of his previous books. His most recent is America's Victory, a riveting account of the world's most famous yacht race in 1851. Shaw's expertise as a sailor and his in-depth knowledge of the Civil War make him ideally suited to tell the story of Confederate raider Charles W. Read and his infamous voyage of 1863. Shaw has contributed articles to numerous publications, including The New York Times, Sail, Entrepreneur, Cruising World, Woman's World, and New Jersey Monthly. He lives in New Jersey with his wife.

Praise For The Sea Shall Embrace Them: The Tragic Story of the Steamship Arctic…

Walter Lord Author of A Night to Remember A riveting story told by a superb writer.

Charles Pellegrino Coauthor with James Cameron of Ghosts of the Titanic A stunning account, based on logical conclusions and meticulous research.

Duncan C. Spencer The Washington Post A straightforward cautionary tale, clearly told....There is restraint and judgment here in the telling.

People Magazine Gripping....Shaw's true achievement is bringing to life the long-lost people aboard the Arctic.
or support indie stores by buying on
Copyright © 2020 American Booksellers Association