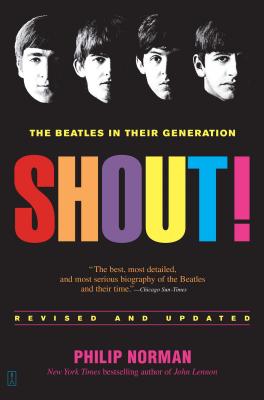 The Beatles in Their Generation

Updated to include Paul McCartney’s knighting and the deaths of John Lennon and George Harrison.

Philip Norman’s biography of the Beatles is the definitive work on the world's most influential band—a beautifully written account of their lives, their music, and their times. Now brought completely up to date, this epic tale charts the rise of four scruffy Liverpool lads from their wild, often comical early days to the astonishing heights of Beatlemania, from the chaos of Apple and the collapse of hippy idealism to the band's acrimonious split. It also describes their struggle to escape the smothering Beatles’ legacy and the tragic deaths of John Lennon and George Harrison. Witty, insightful, and moving, Shout! is essential reading not just for Beatles fans but for anyone with an interest in pop music.

Philip Norman is a journalist and a novelist who in 1968 was assigned to cover the Beatles’ own business utopia, Apple Corps, from the inside. He is the author of Rave On: The Biography of Buddy Holly and many other books.

Praise For Shout!: The Beatles in Their Generation…

"The best, most detailed, and most serious biography of the Beatles and their time."
-- Chicago Sun-Times