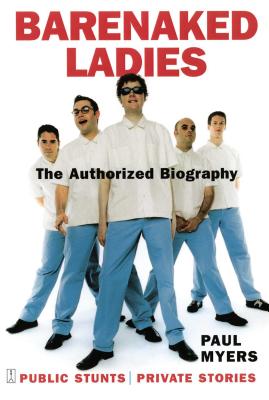 From geeks in short pants to multiplatinum artists, Barenaked Ladies are nothing less than a phenomenon. Now, for the first time in the United States, we can read their astonishing story.
Steven, Ed, Jim, Tyler, and Kevin have two Grammy nominations under their belts, they've appeared on The Tonight Show and Saturday Night Live, and their music is featured in commercials. They've even preempted the Olympics and rocked the vote on The West Wing. Their quirky, bizarre lyrics and unforgettable live performances have secured a rabidly loyal fan base across North America. They are Barenaked Ladies.
Want to know more about this Canadian quintet? It's all here, from the births of five Barenaked babies to the triumph of band member Kevin over leukemia.

Given exclusive access to the band, author Paul Myers gets inside the heads of five guys who drew on their eclectic backgrounds to generate a groundbreaking musical style.
Fun, frank, and sometimes frivolous, this is the naked truth behind Barenaked Ladies.

Paul Myers is a Canadian musician and writer who first met Barenaked Ladies in the early '90s when they opened for his band, the Gravelberrys.
Loading...
or support indie stores by buying on