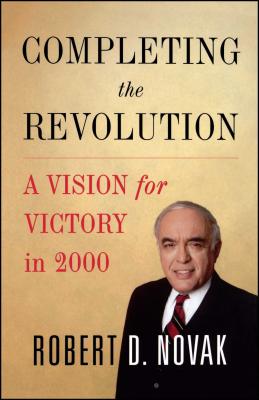 Twice in the past generation, the Republican party has proclaimed a "revolution" in American politics. In 1980, Ronald Reagan won a landslide victory on a platform of tax cuts, smaller government, and a stronger defense. And in 1994, Newt Gingrich took up the revolutionary mantle, tossing out the Democratic Congress and proclaiming the end of "business as usual" in Washington.

As the 2000 presidential election draws near, the optimism of those heady days seems like ancient history. The Reagan years are a dim memory, and the Republican leadership on Capitol Hill after five years in power has failed to enact the Contract with America. In 2000, the GOP faces not only the possibility of a third consecutive presidential defeat but the prospect of losing its House majority as well. The time for dithering is over, and the time for action is now.

"Completing the Revolution" is Robert Novak's manifesto for a Republican victory in November and for implementing a conservative vision for government in the years to come. He brings to his analysis the combativeness familiar to those who watch him on CNN's "Crossfire, " and the insight and perspective that have helped to make him one of America's leading political columnists. He is not afraid to criticize the various presidential candidates or the Republican leaders in Congress, especially those who fail to stand up for the party's principles -- whom he calls "Clintonized Republicans."

At the center of "Completing the Revolution" is Novak's bold proposal for a new Republican agenda, one that remains true to the party's core values and can command a majority in the country. He offers surprising and original perspectives on taxes, Social Security, abortion, campaign finance, race and gender politics, and term limits, among other issues. He also lays bare the fault lines that have emerged in the 2000 presidential race and shows how they offer the party a stark choice: division and defeat, or principled victory. The road to the White House, Novak admonishes, requires one thing above all, from candidates and supporters alike: the courage to stick to real Republican principles.

For any conservative who cares about the direction of public life in America, Robert Novak has provided the essential guide to our nation's millennial election.