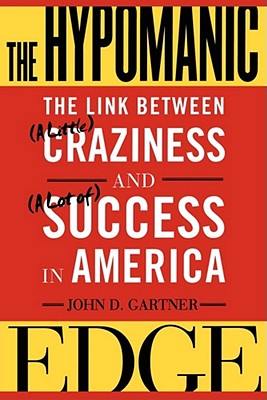 Why is America so rich and powerful? The answer lies in our genes, according to psychologist John Gartner.

Hypomania, a genetically based mild form of mania, endows many of us with unusual energy, creativity, enthusiasm, and a propensity for taking risks. America has an extraordinarily high number of hypomanics—grandiose types who leap on every wacky idea that occurs to them, utterly convinced it will change the world. Market bubbles and ill-considered messianic crusades can be the downside. But there is an enormous upside in terms of spectacular entrepreneurial zeal, drive for innovation, and material success. Americans may have a lot of crazy ideas, but some of them lead to brilliant inventions.

Why is America so hypomanic? It is populated primarily by immigrants. This self-selection process is the boldest natural experiment ever conducted. Those who had the will, optimism, and daring to take the leap into the unknown have passed those traits on to their descendants.

Bringing his audacious and persuasive thesis to life, Gartner offers case histories of some famous Americans who represent this phenomenon of hypomania. These are the real stories you never learned in school about some of those men who made America: Columbus, who discovered the continent, thought he was the messiah. John Winthrop, who settled and defined it, believed Americans were God’s new chosen people. Alexander Hamilton, the indispensable founder who envisioned America’s economic future, self-destructed because of pride and impulsive behavior. Andrew Carnegie, who began America's industrial revolution, was sure that he was destined personally to speed up human evolution and bring world peace. The Mayer and Selznick families helped create the peculiarly American art form of the Hollywood film, but familial bipolar disorders led to the fall of their empires. Craig Venter decoded the human genome, yet his arrogance made him despised by most of his scientific colleagues, even as he spurred them on to make great discoveries.

While these men are extraordinary examples, Gartner argues that many Americans have inherited the genes that have made them the most successful citizens in the world.

Praise For The Hypomanic Edge: The Link Between (A Little) Craziness and (A Lot of) Success in America…

"The Hypomanic Edge reveals a secret history of America, the hidden psychiatric underbelly of legendary successes and the cult of celebrity. John Gartner tells the story with gripping detail and a clinician's authority. After this book, you'll never read the business pages in quite the same way."


"America is a land settled by adventurers and risk takers, and the mania that made it great seems to be bred into its genes. In this provocative and interesting book, John Gartner explores that theory with vivid case studies and an expert's understanding of clinical psychology."

"Gartner's genius is to make visible a psychological phenomenon that is part of our history and daily lives which we didn't see before. It will change the way Americans think of themselves and incite hypomania envy among the normal people of the world."


"Finally someone gets it. Through fabulous profiles of the likes of Carnegie, Hamilton, the Selznicks and the Mayers -- my favorites -- John D. Gartner explains how brains hardwired for success, otherwise known as hypomania, have contributed so much to the richness of our great country. Three cheers for Gartner. He recognizes that hypomania is integral to the success of those who challenge every assumption on the way to creating fabulous wealth, brilliant movies, and, yes, even a nation."

-- James Cramer, markets commentator for CNBC and thestreet.com and author of Confessions of a Street Addict


"Examining an assortment of historical and present-day movers and shakers through the lens of modern psychiatry, Gartner has come up with a diagnosis that could well help explain what makes America, well, America. The Hypomanic Edge is a surprising -- and thoroughly engaging -- book."

-- Joe Nocera, Editorial Director of Fortune, author of A Piece of the Action


"Are Americans rich because they're nuts?...It sounds right...a fun read...Gartner is right that hypomanic first movers matter a lot, and that we need a few more."

"It's very interesting...it explains a lot about America."

--Richard Cohen, Columnist, The Washington Post, on Topic A with Tina Brown (chosen as a "hot pick")

"A psycho-biographical examination of how the United States' hopped-up gene pool shaped our national character and gave us a head start to world domination."

"'American entrepreneurs are largely hypomanic,' Gartner declares, but the story doesn't begin and end with today's would-be Donald Trumps. The United States is a land of immigrants, he observes, populated by those whose ancestors were energetic and optimistic enough to leave a familiar homeland for strange shores...America's long history of immigration...has made it a 'hypomanic nation.'"

John D. Gartner, PhD, is a clinical assistant professor of psychiatry at Johns Hopkins University Medical School. He is a graduate of Princeton University. He is widely published in scholarly journals and books, and his work has also appeared in the Baltimore Sun and Talk magazine. Gartner lives and practices as a clinical psychologist in Baltimore.
Loading...
or support indie stores by buying on