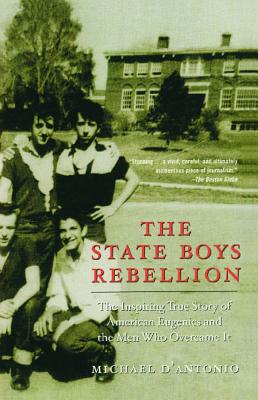 A Pulitzer Prize-winning journalist tells the amazing story of how a group of imprisoned boys won their freedom, found justice, and survived one of the darkest and least-known episodes of American history.
In the early twentieth century, United States health officials used IQ tests to single out "feebleminded" children and force them into institutions where they were denied education, sterilized, drugged, and abused. Under programs that ran into the 1970s, more than 250,000 children were separated from their families, although many of them were merely unwanted orphans, truants, or delinquents.
The State Boys Rebellion conveys the shocking truth about America's eugenic era through the experiences of a group of boys held at the Fernald State School in Massachusetts starting in the late 1940s. In the tradition of Erin Brockovich, it recounts the boys' dramatic struggle to demand their rights and secure their freedom. It also covers their horrifying discovery many years later that they had been fed radioactive oatmeal in Cold War experiments -- and the subsequent legal battle that ultimately won them a multimillion-dollar settlement.
Meticulously researched through school archives, previously sealed papers, and interviews with the surviving State Boys, this deft exposé is a powerful reminder of the terrifying consequences of unchecked power as well as an inspiring testament to the strength of the human spirit.

Michael D'Antonio is the author of many acclaimed books, including Atomic Harvest, Fall from Grace, Tin Cup Dreams, Mosquito, and The State Boys Rebellion. His work has also appeared in Esquire, The New York Times Magazine, Los Angeles Times Magazine, Discover, and many other publications. Among his many awards is the Pulitzer Prize, which he shared with a team of reporters for Newsday.

Praise For The State Boys Rebellion…

"One of the best books of 2004."
-- The Christian Science Monitor and Chicago Tribune