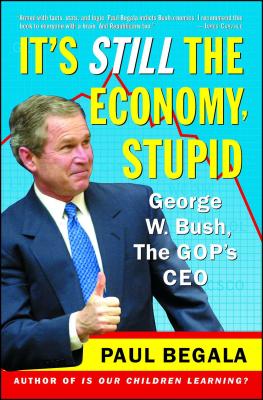 It's Still the Economy, Stupid

When he took office in 2001, George W. Bush inherited the strongest economy in American history. He inherited the largest federal budget surplus in American history -- and the prospect of paying off the entire national debt in just eight years. He inherited a strong dollar and sound fiscal policy. He inherited a nation whose economy was so strong that commentators who just a decade before were predicting American decline were now complaining about American dominance.
And yet, Dubya blew it. Squandered everything he'd inherited from President Clinton.
We thought if Junior was good at anything, it was inheriting things.
It's Still the Economy, Stupid is the story of how America's CEO -- our first MBA president -- has trashed our economy. It shows:
• How he wasted the surplus on massive tax cuts for the hyper-rich.
• How he talked down the economy for his short-term political gain, then passed an economic program that has put 1.8 million Americans out of work and cost investors $4.4 trillion.
• How he abandoned his free-trade rhetoric to adopt protectionist tariffs, effectively raising taxes on consumers.
• How he walked away from needed investments in education, training, and all the things that make us smarter, safer, and stronger economically.
• How he plans to go on from here to cripple Social Security and to allow the privileged to avoid even more taxes.
It makes you wonder: What do they teach you at Harvard Business School?

Praise For It's Still the Economy, Stupid: George W. Bush, The GOP's CEO…

James Carviile Armed with facts, stats, and logic, Paul Begala indicts Bush-onomics. I recommend this book to everyone with a brain. And Republicans too.

Tom Daschle Majority Leader, United States Senate Paul Begala is one Texan who really understands the economy. It's Still the Economy, Stupid is a good read that makes great sense.

Paul Begala was a chief strategist for the 1992 Clinton-Gore campaign. He served as counselor to the president in the Clinton White House, where he coordinated policy, politics, and communications. He was senior adviser to the pro-Obama Super PAC that played a critical role in reelecting Obama in 2012. He is the author of five books, including Is Our Children Learning?: The Case Against George W. Bush; It’s Still the Economy, Stupid; Buck Up, Suck Up...and Come Back When You Foul Up (with James Carville); Third Term: Why George W. Bush Loves John McCain; and Take it Back: Our Party, Our Country, Our Future (with James Carville). Begala is a CNN political commentator and an affiliated professor of public policy at Georgetown University’s McCourt School of Public Policy. Paul earned both his undergraduate and law degrees from the University of Texas. He and his wife live quietly in Virginia with their four sons and a German shepherd. (Okay, so they don’t live too quietly.)
Loading...
or support indie stores by buying on