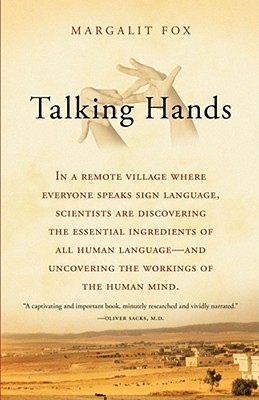 Imagine a village where everyone "speaks" sign language. Just such a village -- an isolated Bedouin community in Israel with an unusually high rate of deafness -- is at the heart of Talking Hands: What Sign Language Reveals About the Mind. There, an indigenous sign language has sprung up, used by deaf and hearing villagers alike. It is a language no outsider has been able to decode, until now.

A New York Times reporter trained as a linguist, Margalit Fox is the only Western journalist to have set foot in this remarkable village. In Talking Hands, she follows an international team of scientists that is unraveling this mysterious language.

Because the sign language of the village has arisen completely on its own, outside the influence of any other language, it is a living demonstration of the "language instinct," man's inborn capacity to create language. If the researchers can decode this language, they will have helped isolate ingredients essential to all human language, signed and spoken. But as Talking Hands grippingly shows, their work in the village is also a race against time, because the unique language of the village may already be endangered.

Talking Hands offers a fascinating introduction to the signed languages of the world -- languages as beautiful, vital and emphatically human as any other -- explaining why they are now furnishing cognitive scientists with long-sought keys to understanding how language works in the mind.

Written in lyrical, accessible prose, Talking Hands will captivate anyone interested in language, the human mind and journeys to exotic places.

Praise For Talking Hands: What Sign Language Reveals About the Mind…

"This is a captivating and important book, minutely researched and vividly narrated, about an isolated Bedouin village where hearing and deaf people alike communicate in sign language. Such situations are increasingly rare and precious. Fox's book will be fascinating to anyone interested in the nature of human language or indeed in cognitive neuroscience."

Margalit Fox is a public speaker and an award-winning reporter in the famed obituary news department of The New York Times as well a former New York Times Book Review editor. Fox has a master's degrees in linguistics from Stony Brook University and a masters degree from Columbia Journalism. she lives in Manhattan with her husband, the writer and critic George Robinson..
Loading...
or support indie stores by buying on