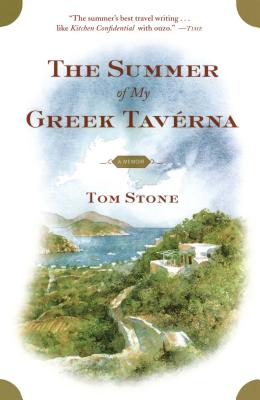 The Summer of My Greek Taverna (Paperback)

The story of a man in love with a place, a woman, and a dream.
Tom Stone went to Greece one summer to write a novel -- and stayed twenty-two years. On Patmos, he fell in love with Danielle, a beautiful French painter. His novel completed and sold, he decided to stay a little longer.
Seven idyllic years later, they left Patmos for Crete. When a Patmian friend Theológos called and offered him a summer partnership in his beach tavérna, The Beautiful Helen, Stone jumped at the chance -- much to the dismay of his wife, who cautioned him not to forget the old adage about Greeks bearing gifts.
Her warning was well-founded: when back on Patmos, Stone quickly discovered that he was no longer a friend or patron but a competitor. He learned hard lessons about the Greeks' skill at bargaining and business while reluctantly coming to the realization that Theológos's offer of a partnership was indeed a Trojan horse.
Featuring Stone's recipes, including his own Chicken Retsina and the ultimate moussaka, The Summer of My Greek Tavérna is as much a love story as it is the grand, humorous, and sometimes bittersweet adventures of an American pursuing his dreams in a foreign land, a modern-day innocent abroad.

Praise For The Summer of My Greek Taverna: A Memoir…

The New York Times Book Review His infatuation with the place (whether "fueled by an excess of retsina" or not) is infectious.