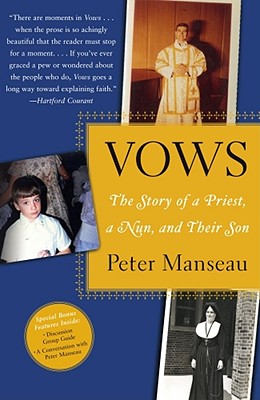 The Story of a Priest, a Nun, and Their Son

Vows is a compelling story of one family's unshakable faith that to be called is to serve, however high the cost may be. Peter Manseau's riveting evocation of his parents' parallel childhoods, their similar callings, their experiences in the seminary and convent, and how they met while tending to the homeless of Roxbury, Massachusetts, during the riot-prone 1960s is a page-turning meditation on the effect that love can have on profound faith.

Praise For Vows: The Story of a Priest, a Nun, and Their Son…

"This is a strange and marvelous story, told with unerring grace. In the Manseau family, the call to religious service is like the call of the ancient Sirens. And yet they survive. Peter Manseau's writing is keen-eyed, lyrical, muscular, and more, and while Vows is a story about big ideas -- religion, devotion, sacrifice -- it is above all a love letter to his own family."

"[Vows] forms a history of how the priesthood evolved -- and how people navigate the boundaries between religious tradition and modern life. In the process, Manseau paints a picture of liberal -- and devoutly religious -- Catholics facing up to the church's authority."

"With the grace of a gifted storyteller and a son's love for his parents, Peter Manseau tells a story that's not been previously told....Vows...isn't sensational or hostile, but rather a revelatory and nuanced exploration of his parents and their relationship with the Catholic Church, which has both blessed them and wounded them."

"There are moments in Vows...when the prose is so achingly beautiful that the reader must stop for a moment.... If you've ever graced a pew or wondered about the people who do, Vows goes a long way toward explaining faith."

Peter Manseau is the author of Vows and coauthor of Killing the Buddha. His writing has also appeared in The New York Times Magazine, The Washington Post, and on National Public Radio's All Things Considered. A founding editor of the award-winning webzine KillingTheBuddha.com, he is now the editor of Search, The Magazine of Science, Religion, and Culture. He lives with his wife and two daughters in Washington, D.C., where he studies religion and teaches writing at Georgetown University.
Loading...
or
Not Currently Available for Direct Purchase