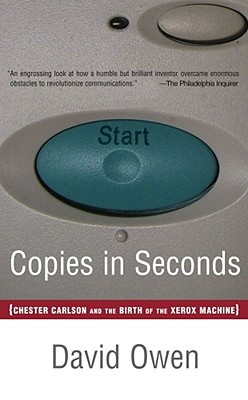 A lone inventor and the story of how one of the most revolutionary inventions of the twentieth century almost didn't happen.
Introduced in 1960, the first plain-paper office copier is unusual among major high-technology inventions in that its central process was conceived by a single person. Chester Carlson grew up in unspeakable poverty, worked his way through junior college and the California Institute of Technology, and made his discovery in solitude in the depths of the Great Depression. He offered his big idea to two dozen major corporations -- among them IBM, RCA, and General Electric -- all of which turned him down. So persistent was this failure of capitalistic vision that by the time the Xerox 914 was manufactured, by an obscure photographic-supply company in Rochester, New York, Carlson's original patent had expired.
Xerography was so unusual and nonintuitive that it conceivably could have been overlooked entirely. Scientists who visited the drafty warehouses where the first machines were built sometimes doubted that Carlson's invention was even theoretically feasible. Building the first plain-paper office copier -- with parts scrounged from junkyards, cleaning brushes made of hand-sewn rabbit fur, and a built-in fire extinguisher -- required the persistence, courage, and imagination of an extraordinary group of physicists, engineers, and corporate executives whose story has never before been fully told.
Copies in Seconds is a tale of corporate innovation and risk-taking at its very best.