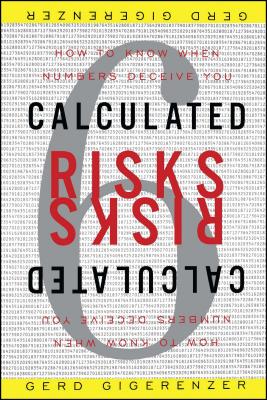 How to Know When Numbers Deceive You

At the beginning of the twentieth century, H. G. Wells predicted that statistical thinking would be as necessary for citizenship in a technological world as the ability to read and write. But in the twenty-first century, we are often overwhelmed by a baffling array of percentages and probabilities as we try to navigate in a world dominated by statistics.
Cognitive scientist Gerd Gigerenzer says that because we haven't learned statistical thinking, we don't understand risk and uncertainty. In order to assess risk -- everything from the risk of an automobile accident to the certainty or uncertainty of some common medical screening tests -- we need a basic understanding of statistics.
Astonishingly, doctors and lawyers don't understand risk any better than anyone else. Gigerenzer reports a study in which doctors were told the results of breast cancer screenings and then were asked to explain the risks of contracting breast cancer to a woman who received a positive result from a screening. The actual risk was small because the test gives many false positives. But nearly every physician in the study overstated the risk. Yet many people will have to make important health decisions based on such information and the interpretation of that information by their doctors.
Gigerenzer explains that a major obstacle to our understanding of numbers is that we live with an illusion of certainty. Many of us believe that HIV tests, DNA fingerprinting, and the growing number of genetic tests are absolutely certain. But even DNA evidence can produce spurious matches. We cling to our illusion of certainty because the medical industry, insurance companies, investment advisers, and election campaigns have become purveyors of certainty, marketing it like a commodity.
To avoid confusion, says Gigerenzer, we should rely on more understandable representations of risk, such as absolute risks. For example, it is said that a mammography screening reduces the risk of breast cancer by 25 percent. But in absolute risks, that means that out of every 1,000 women who do not participate in screening, 4 will die; while out of 1,000 women who do, 3 will die. A 25 percent risk reduction sounds much more significant than a benefit that 1 out of 1,000 women will reap.
This eye-opening book explains how we can overcome our ignorance of numbers and better understand the risks we may be taking with our money, our health, and our lives.

Gerd Gigerenzer is director of the Center for Adaptive Behavior and Cognition at the Max Planck Institute for Human Development in Berlin, Germany. He has taught at several universities, including the University of Chicago and the University of Virginia, and has been a Fellow at the Center of Advanced Study in the Behavioral Sciences at Stanford University.
Loading...
or support indie stores by buying on