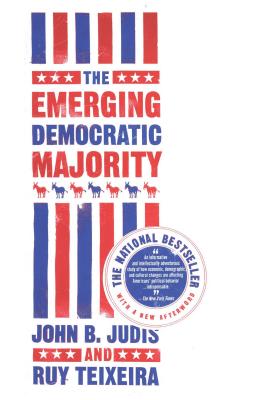 ONE OF THE ECONOMIST'S BEST BOOKS OF THE YEAR AND A WINNER OF THE WASHINGTON MONTHLY'S ANNUAL POLITICAL BOOK AWARD
Political experts John B. Judis and Ruy Teixeira convincingly use hard data -- demographic, geographic, economic, and political -- to forecast the dawn of a new progressive era. In the 1960s, Kevin Phillips, battling conventional wisdom, correctly foretold the dawn of a new conservative era. His book, The Emerging Republican Majority, became an indispensable guide for all those attempting to understand political change through the 1970s and 1980s. At the beginning of the twenty-first century, with the country in Republican hands, The Emerging Democratic Majority is the indispensable guide to this era.
In five well-researched chapters and a new afterword covering the 2002 elections, Judis and Teixeira show how the most dynamic and fastest-growing areas of the country are cultivating a new wave of Democratic voters who embrace what the authors call "progressive centrism" and take umbrage at Republican demands to privatize social security, ban abortion, and cut back environmental regulations.
As the GOP continues to be dominated by neoconservatives, the religious right, and corporate influence, this is an essential volume for all those discontented with their narrow agenda -- and a clarion call for a new political order.

Praise For The Emerging Democratic Majority…

Paul Begala cohost, CNN's Crossfire A must-read for every strategist, analyst, and active citizen who wants to understand where our country is going politically.

The Washington Post With a keen eye for demographic and cultural trends, Judis and Teixeira argue persuasively that George [W.] Bush's Republican Party is headed for a showdown with the American electorate....An important book.

John B. Judis is an author and journalist from Chicago, Illinois. He is an editor at Talking Points Memo.
Loading...
or support indie stores by buying on