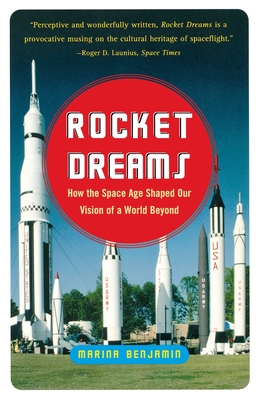 How the Space Age Shaped Our Vision of a World Beyond

Remember when the race to the moon held the rapt attention of millions? Remember the Apollo missions that were supposed to herald the beginning of the Space Age? Thirty years after the last moonwalk, those missions now appear to have ushered in an era's conclusion. What happened?
Marina Benjamin has been asking that question ever since her childhood fascination with space exploration ended in disappointment. Rocket Dreams is her thought-provoking look at the Space Age and the shadow it casts on the fabric of our modern lives. When the futuristic expectations we pinned on Apollo came crashing back to earth, Benjamin argues, new phenomena took up the cause. Pulling movies, literature, junk culture, and the Internet into an irreverent alternative account of the post-Apollo years, she links the demise of the Space Age to groups like the church of Noetics -- founded by astronaut Edgar Mitchell -- to the spread of UFO believers, even to the birth of fantasy literature. Propelling us through the golden age of Space Age-dreaming during the seventies and eighties, Benjamin finally touches down on...the Web. Has cyberspace become the new frontier we once thought outer space would be?
From Florida's overgrown rocket graveyards to Roswell, New Mexico, and beyond, this skillful blend of history and social observation examines the rise and fall of America's space obsession as never before.