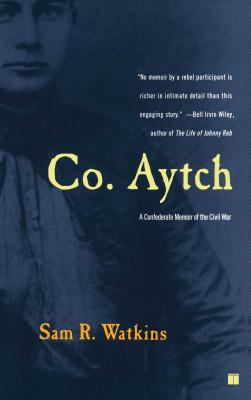 A Confederate Memoir of the Civil War

A classic Civil War memoir, Co. Aytch is the work of a natural storyteller who balances the horror of war with an irrepressible sense of humor and a sharp eye for the lighter side of battle. It is a testament to one man’s enduring humanity, courage, and wisdom in the midst of death and destruction.

Early in May 1861, twenty-one-year-old Sam R. Watkins of Columbia, Tennessee, joined the First Tennessee Regiment, Company H, to fight for the Confederacy. Of the 120 original recruits in his company, Watkins was one of only seven to survive every one of its battles, from Shiloh to Nashville.

Twenty years later, with a “house full of young ‘rebels’ clustering around my knees and bumping about my elbows,” he wrote this remarkable account—a memoir of a humble soldier fighting in the American Civil War, replete with tales of the common foot soldiers, commanders, Yankee enemies, victories, defeats, and the South’s ultimate surrender on April 26, 1865.

Praise For Co. Aytch: A Confederate Memoir of the Civil War…

Bell Irvin Wiley Author of The Life of Johnny Reb No memoir by a rebel participant is richer in intimate detail than this engaging story.

Margaret Mitchell From Gone With the Wind Letters A better book there never was.
or
Buy Here
Copyright © 2020 American Booksellers Association