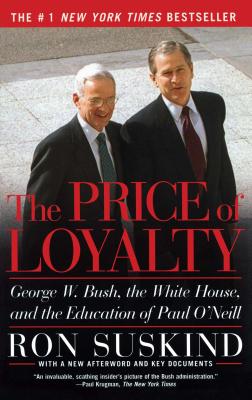 The Price of Loyalty

George W. Bush, the White House, and the Education of Paul O'Neill

Updated with a new afterword and including a selection of key documents, this is the explosive account of how the Bush administration makes policy on war, taxes, and politics -- its true agenda exposed by a member of the Bush cabinet.
This vivid, unfolding narrative is like no other book that has been written about the Bush presidency. At its core are the candid assessments of former Secretary of the Treasury Paul O'Neill, the only member of Bush's cabinet to leave and speak frankly about how and why the administration has come to its core policies and decisions -- from cutting taxes for the rich to conducting preemptive war.
O'Neill's account is supported by Pulitzer Prize-winning journalist Ron Suskind's interviews with numerous participants in the administration, by transcripts of meetings, and by voluminous documents. The result is a disclosure of breadth and depth unparalleled for an ongoing presidency. As readers are taken to the very epicenter of government, Suskind presents an astonishing picture of a president so carefully managed in his public posture that he is a mystery to most Americans. Now, he is revealed.

Praise For The Price of Loyalty: George W. Bush, the White House, and the Education of Paul O'Neill…

Ward Just The New York Observer A first-rate piece of work....The best we're likely to have for some time....An intelligent and nuanced narrative.

The New York Times An invaluable contribution both to the historical record and to the fierce public debate over the nature of the Bush administration's true views and motivations on issues of war and peace.

Business Week Suskind is a smart writer....He deftly picks through some 19,000 documents and hours of interviews to open an often eye-popping window into the Bush White House.

The New York Review of Books A detailed, deeply disturbing look at how the Bush administration makes policy.

Ron Suskind is the author of the # 1 New York Times bestseller The Price of Loyalty: George W. Bush, the White House, and the Education of Paul O'Neill. He is also the author of the critically acclaimed A Hope in the Unseen. He has been senior national affairs reporter for The Wall Street Journal, where he won the Pulitzer Prize for Feature Writing. Visit the author's website at www.ronsuskind.com.
Loading...
or support indie stores by buying on