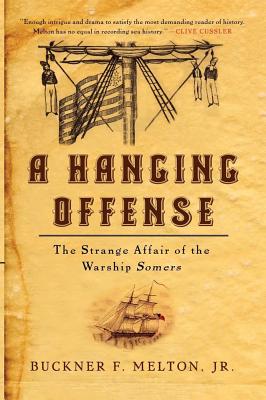 The Strange Affair of the Warship Somers

Mutiny on the Bounty is one of history's greatest naval stories -- yet few know the similar tale from America's own fledgling navy in the dying days of the Age of Sail, a tale of mutiny and death at sea on an American warship.
In 1842, the brig-of-war Somers set out on a training cruise for apprentice seamen, commanded by rising star Alexander Mackenzie. Somers was crammed with teenagers. Among them was Acting Midshipman Philip Spencer, a disturbed youth and a son of the U.S. Secretary of War. Buying other crew members' loyalty with pilfered tobacco and alcohol, Spencer dreamed up a scheme to kill the officers and turn Somers into a pirate ship.
In the isolated world of a warship, a single man can threaten the crew's discipline and the captain's authority. But one of Spencer's followers warned Mackenzie, who arrested the midshipman and chained him and other ringleaders to the quarterdeck. Fearing efforts to rescue the prisoners, officers had to stay awake in round-the-clock watches. Steering desperately for land, sleep-deprived and armed to the teeth, battling efforts to liberate Spencer, Somers's captain and officers finally faced a fateful choice: somehow keep control of the vessel until reaching port -- still hundreds of miles away -- or hang the midshipman and his two leading henchmen before the boys could take over the ship.
The results shook the nation. A naval investigation of the affair turned into a court-martial and a state trial and led to the founding of the Naval Academy to provide better officers for the still-young republic. Mackenzie's controversial decision may have inspired Herman Melville's great work Billy Budd. The story of Somers raises timeless questions still disturbing in twenty-first-century America: the relationship between civil and military law, the hazy line between peace and war, the battle between individual rights and national security, and the ultimate challenge of command at sea.