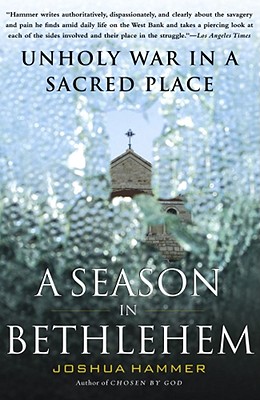 A Season in Bethlehem

Unholy War in a Sacred Place

Newsweek's Jerusalem bureau chief Joshua Hammer arrived in the West Bank in October 2000 -- just after Ariel Sharon made his inflammatory visit to the Haram al-Sharif, otherwise known as the Temple Mount. Sharon's trip ignited the worst violence the Middle East had seen in decades. Overnight, the peace process gave way to an ever-worsening cycle of attack, revenge, and retaliation, destabilizing the entire region, killing thousands, and culminating in Israel's reoccupation of Palestinian towns in 2002.
A Season in Bethlehem is the story of one West Bank town's two-year disintegration, as witnessed by a reporter who was there from the beginning. Woven together from Hammer's own firsthand reportage plus hundreds of interviews, it follows a dozen characters whose lives collided on the streets of this biblical city. They include a Bedouin tribesman who rose to become the commander of Bethlehem's most feared and brutal gang of gunmen; the beleaguered governor, an opponent of the al-Aqsa intifada, who believed he had a mandate to stop the violence, only to discover that Yasser Arafat was undermining him; a Christian businesman who watched helplessly as his community was squeezed between Muslim militants and the Israeli army; an eighteen-year-old female honors student turned suicide bomber; and an Israeli reservist, son of a leader of the Peace Now movement, who wrestled with his left-wing convictions as he rode to battle through the predawn streets.
The narrative reaches a climax with a moment-by-moment recreation of the epochal drama that drew many of these characters together: the thirty-nine-day siege of the Church of the Nativity. A clear-eyed chronicle of deepening chaos and violence, in which Hammer lets the opposing sides speak for themselves, A Season in Bethlehem is both a timely and timeless look at how longstanding religious and political tensions finally boiled over in a place of profound resonance: the birthplace of Jesus.

Praise For A Season in Bethlehem: Unholy War in a Sacred Place…

Fareed Zakaria author of The Future of Freedom Joshua Hammer reports like a journalist and writes like a novelist. The result is a gripping book that tells the story of the Israeli-Palestinian conflict through one town and a dozen people, whose lives come together in the climactic 39-day siege of Bethlehem. There have been many books written about the history, the politics, and the violence of the Middle East. This is a book about the people who live through it all.

Scott Anderson author of The Man Who Tried to Save the World Joshua Hammer has achieved something truly remarkable here: by focusing on a single seminal event in modern Arab-Israeli history -- the 2002 siege of the Church of the Nativity in Bethlehem -- and letting its participants tell their stories, he has cast a piercing light on the passions and furies that plague the Holy Land. Rather than another polemic on the Middle East troubles, A Season in Bethlehem reads like a thriller -- a particularly thoughtful and humane one.

Amy Wilentz author of Martyr's Crossing A Season in Bethlehem examines this fascinating, historic city in microcosm, and uses it to explain why the situation in the Middle East is so explosive. Hammer's detailed portraits of all the actors and his incredible ability to create atmosphere bring the whole place to life. His moment-by-moment narration of the siege of the Church of the Nativity is riveting. You can't believe Hammer was so near all this, observing firsthand the terrible tension, the dangerous standoff. A brave book.

Joshua Hammer is the New York Times bestselling author of The Bad-Ass Librarians of Timbuktu. He has written for The New York Times Magazine, GQ, Smithsonian, The Atlantic, The New Yorker, National Geographic, and Outside. He lives in Berlin.
Loading...
or support indie stores by buying on