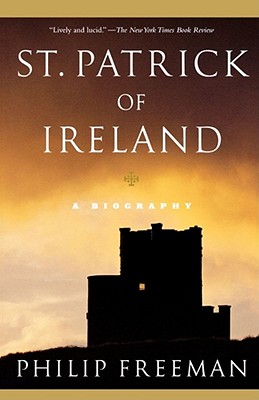 The most authoritative modern biography of the patron saint of Ireland, focusing on the historical Patrick and his times.

Ireland’s patron saint has long been shrouded in legend, but the true story of St. Patrick is far more inspiring than the myths. In St. Patrick of Ireland, Philip Freeman brings the historic Patrick and his world vividly to life. Patrick speaks in his own voice in two remarkable letters he wrote about himself and his beliefs, new translations of which are included here and which are still astonishing for their passion and eloquence.

Born late in the fourth century to an aristocratic British family, Patrick’s life was changed forever when he was abducted and taken to Ireland just before his sixteenth birthday. He spent six grueling years there as a slave, but the ordeal turned him from an atheist into a true believer. After a vision in which God told him he would go home, Patrick escaped captivity and, following a perilous journey, returned safely to Britain to the amazement of his family. But even more amazing to them was his announcement that he intended to go back to Ireland to spend the rest of his life ministering to the people who had once enslaved him.

Set against the turbulent backdrop of the British Isles during the last years of the Roman Empire, St. Patrick of Ireland brilliantly brings to life the real Patrick, a man whose deep spiritual conviction and devotion helped to transform a country.

Praise For St. Patrick of Ireland: A Biography…

"Mr. Freeman's book succeeds where others have failed by giving us a wholly human portrait of Patrick the boy, the slave and the missionary."
-- Michael Judge, The Wall Street Journal

"Freeman's imaginative but fact-based reconstructions of significant events in Patrick's life, such as his kidnapping, read like the most exciting popular fiction."
-- Library Journal