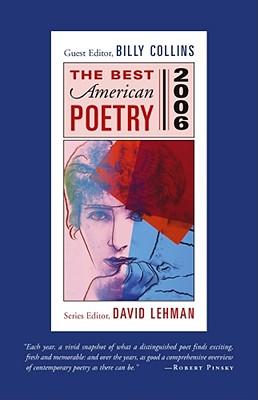 Billy Collins, one of our most beloved poets, has chosen poems of wit, humor, imagination, and surprise, in a range of styles and forms, for The Best American Poetry 2006. The result is a celebration of the pleasures of poetry.

In his charming and candid introduction Collins explains how he chose seventy-five poems from among the thousands he considered. With insightful comments from the poets illuminating their work, and series editor David Lehman's thought-provoking foreword, The Best American Poetry 2006 is a brilliant addition to a series that links the most noteworthy verse and prose poems of our time to a readership as discerning as it is devoted to the art of poetry.

Billy Collins is the award-winning author of The Trouble with Poetry, Nine Horses, Sailing Alone Around the Room, and Picnic, Lightning, among other poetry collections. He has edited the anthologies Poetry 180 and 180 More. He is a distinguished professor of English at Lehman College, City University of New York, where he has taught for the past thirty years. From 2001 to 2003 he served as the Poet Laureate of the United States.

"Each year, a vivid snapshot of what a distinguished poet finds exciting, fresh and memorable: and over the years, as good a comprehensive overview of contemporary poetry as there can be." -- Robert Pinsky
or
Not Currently Available for Direct Purchase
Copyright © 2020 American Booksellers Association