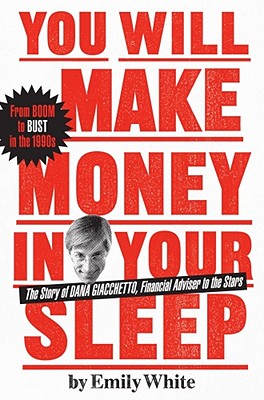 You Will Make Money in Your Sleep

The Story of Dana Giacchetto, Financial Adviser to the Stars

...I was enthralled with Giacchetto. "You must meet him, he is inspired," I told a successful friend. "Oh, if you have any money you should invest it with him." Now this friend says to me, "Emily, I'm glad I didn't listen to you."

I knew Dana before the time of the celebrities and I watched as the celebrities transformed his life. I met him in 1992 when he came to Seattle to begin work on what would be one of his most famous deals: the selling of Nirvana's first record label, Sub Pop. My husband was Sub Pop's general manager. He owned a 1 percent share of the company, and he made enough money from the deal to buy a house and give Dana $100,000 to put into a "safe bond." Rich ended up losing $80,000 of the investment, but that was later, after the nineties boom had imploded and Dana had become just another felon.

Because of my entanglement with Dana, this is not an objective book about his life; and although he initially cooperated with it, it could hardly be called an authorized biography. He agreed to a rule of "no editorial control" -- that the story I wrote would be the one I remembered and uncovered. Yet as the story unfolded for me, he became furious that he couldn't control it. We parted ways before I finished the manuscript. Throughout the process of writing about him I have grappled with my memory of him in the nineties, when I thought he was some kind of rescuer.

Praise For You Will Make Money in Your Sleep: The Story of Dana Giacchetto, Financial Adviser to the Stars…

Emily White is the author of Fast Girls: Teenage Tribes and the Myth of the Slut. She has been writing journalism and criticism for fifteen years and has been published in The New York Times Magazine, The New York Times Book Review, Bookforum, Nest, Newsday, The Washington Post, Spin, Village Voice, and other magazines. She lives in Seattle with her husband and daughter.
Loading...
or
Not Currently Available for Direct Purchase