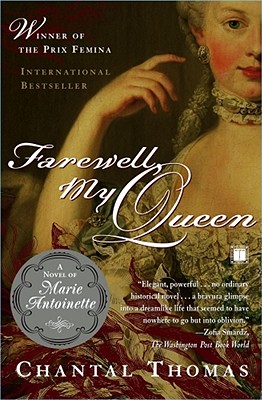 It was once the job of Madame Agathe-Sidonie Laborde to read books aloud to Marie-Antoinette. Now exiled in Vienna, she looks back twenty-one years to the legendary opulence of Versailles and meticulously reconstructs July 14, 15, and 16 of 1789.
When Agathe-Sidonie is summoned to the Queen's side on the morning of the 14th, Versailles is a miniature universe, sparkling with every outward appearance of happiness and power, peopled with nobles of minutely calibrated rank, and run according to a hundred-year-old ritual called the Perfect Day. But with the shocking news that someone has woken the King in the night, order begins to disintegrate and word of the fall of the Bastille seeps into court. Soon Versailles's beauty is nothing more than a shell encasing rising panic and chaos. Agathe-Sidonie watches as the Queen's attempts to flee are aborted; her most intimate friend betrays her; and the King, appearing to sleepwalk through this crisis, never alters his routine of visiting the Apollo Salon several times a day to consult a giant crystal thermometer.
From the tiniest garret to the Hall of Mirrors, where Marie-Antoinette stands alone and terrified in the dark, Chantal Thomas shows us a world on the edge of oblivion and an intimate portrait of the woman who, like "fire in motion," was its center.

Chantal Thomas is a French writer and historian known for her novel, Farewell, My Queen, which was adapted into a film. She worked as a teacher at numerous American and French universities.
Loading...
or support indie stores by buying on