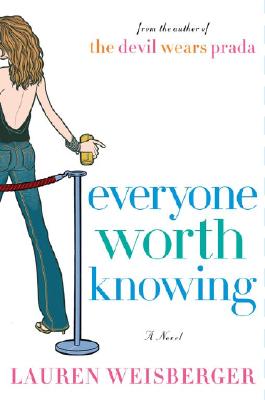 An irresistible tale about what happens when a girl on the fringe enters the realm of New York's chic, party-hopping elite.

On paper, Bette Robinson's life is good. At twenty-six, she's got a great deal on an apartment in Manhattan, and she's on target to become an associate at the prestigious investment bank where she works with her best friend. Her eighty-hour workweeks might keep her from socializing or dating outside her office walls -- but she's paying her dues on the well-trod path to wealth and happiness. So when Bette quits her job like the impulsive girl she's never been, she not only shocks her friends and family -- she has no idea what to do next.

For months, Bette gets out and about by walking her four-pound dog around her decidedly unglamorous Murray Hill neighborhood. Then she meets Kelly, head of Manhattan's hottest PR and events planning firm, and suddenly Bette has a brand-new job where the primary requirement is to see and be seen.

The work at Kelly & Company takes Bette inside the VIP rooms of the city's most exclusive nightclubs, to parties crowded with celebrities and socialites. Bette learns not to blink at the famous faces, the black Amex cards, the magnums of Cristal, or the ruthless paparazzi. Soon she's dating an infamous playboy who's great for her career but bad for her sanity -- and scaring off the one decent guy she meets. Still, as her coworkers repeatedly point out, how can you complain about a job that pays you to party? Bette has to agree -- until she begins appearing in a vicious new gossip column. That's when Bette's life on paper takes on a whole new meaning -- and she learns the line between her personal and professional livesis...invisible.