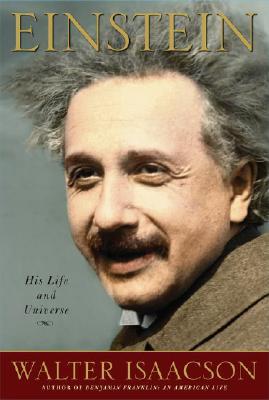 By the author of the acclaimed bestsellers Benjamin Franklin and Steve Jobs, this is the definitive biography of Albert Einstein.

How did his mind work? What made him a genius? Isaacson’s biography shows how his scientific imagination sprang from the rebellious nature of his personality. His fascinating story is a testament to the connection between creativity and freedom.

Based on newly released personal letters of Einstein, this book explores how an imaginative, impertinent patent clerk—a struggling father in a difficult marriage who couldn’t get a teaching job or a doctorate—became the mind reader of the creator of the cosmos, the locksmith of the mysteries of the atom, and the universe. His success came from questioning conventional wisdom and marveling at mysteries that struck others as mundane. This led him to embrace a morality and politics based on respect for free minds, free spirits, and free individuals.

These traits are just as vital for this new century of globalization, in which our success will depend on our creativity, as they were for the beginning of the last century, when Einstein helped usher in the modern age.

"Walter Isaacson has captured the complete Einstein. With an effortless style that belies a sharp attention to detail and scientific accuracy, Isaacson takes us on a soaring journey through the life, mind, and science of the man who changed our view of the universe." -- Brian Greene, Professor of Physics at Columbia and author of The Fabric of the Cosmos

"This book does an amazing job getting the science right and the man revealed." -- Sylvester James Gates, Professor of Physics at the University of Maryland

"This book will be widely and deservedly admired. It is excellently readable and combines the personal and the scientific aspects of Einstein's life in a graceful way." -- Gerald Holton, Professor of Physics at Harvard and author of Einstein, History, and Other Passions

"Once again Walter Isaacson has produced a most valuable biography of a great man about whom much has already been written. It helps that he has had access to important new material. He met the challenge of dealing with his subject as a human being and describing profound ideas in physics. His biography is a pleasure to read and makes the great physicist come alive." -- Murray Gell-Mann, winner of the 1969 Nobel Prize in Physics and author of The Quark and the Jaguar

"With unmatched narrative skill, Isaacson has managed the extraordinary feat of preserving Einstein's monumental stature while at the same time bringing him to such vivid life that we come to feel as if he could be walking in our midst. This is a terrific work." -- Doris Kearns Goodwin, author of Team of Rivals: The Political Genius of Abraham Lincoln

"Isaacson's treatment of Einstein's scientific work is excellent: accurate, complete, and just the right level of detail for the general reader. Taking advantage of the wealth of recently uncovered historical material, he has produced the most readable biography of Einstein yet." -- A. Douglas Stone, Professor of Physics at Yale

"This is a brilliant intellectual tapestry -- and a great read. Skillfully weaving Einstein's revolutionary scientific achievements, his prolific political initiatives, his complex personal life, and his fascinating personality, Isaacson has transformed the transformer of the twentieth century into a beacon for the twenty-first century." -- Martin J. Sherwin, coauthor of American Prometheus:The Triumph and Tragedy of J. Robert Oppenheimer, winner of the 2006 Pulitzer Prize for biography

"I found so much to admire; there are many places where I just had to cheer what Isaacson had written." -- Dudley Herschbach, Professor of Science at Harvard

"Isaacson has written a crisp, engaging, and refreshing biography, one that beautifully masters the historical literature and offers many new insights into Einstein's work and life." -- Diana Kormos Buchwald, General Editor of the Collected Papers of Albert Einstein

"Isaacson has admirably succeeded in weaving together the complex threads of Einstein's personal and scientific life to paint a superb portrait." -- Arthur I. Miller, author of Einstein, Picasso

“This is a biography that happens to be treatise on creativity. I was about to say scientific creativity, but I think I mean creativity itself. It shows us the creative exuberance of a man with an extraordinary visual imagination, able to recast certain problems in surprising ways.”
— Ian McEwan

Walter Isaacson, University Professor of History at Tulane, has been CEO of the Aspen Institute, chairman of CNN, and editor of Time magazine. He is the author of Leonardo da Vinci; The Innovators; Steve Jobs; Einstein: His Life and Universe; Benjamin Franklin: An American Life; and Kissinger: A Biography, and the coauthor of The Wise Men: Six Friends and the World They Made. Facebook: Walter Isaacson, Twitter: @WalterIsaacson
Loading...
or
Not Currently Available for Direct Purchase