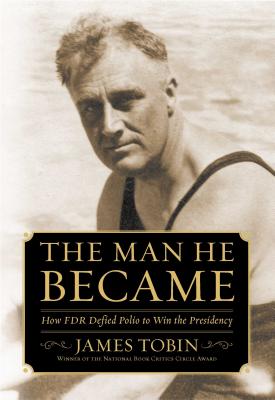 The Man He Became (Hardcover)

How FDR Defied Polio to Win the Presidency

With a searching new analysis of primary sources, NBCC award winner James Tobin reveals how FDR's fight against polio transformed him from a callow aristocrat into the energetic, determined statesman who would rally the nation in the Great Depression and lead it through World War II. Here, from James Tobin, winner of the National Book Critics Circle Award in biography, is the story of the greatest comeback in American political history, a saga long buried in half-truth, distortion and myth-- Franklin Roosevelt's ten-year climb from paralysis to the White House. In 1921, at the age of thirty-nine, Roosevelt was the brightest young star in the Democratic Party. One day he was racing his children around their summer home. Two days later he could not stand up. Hopes of a quick recovery faded fast. "He's through," said allies and enemies alike. Even his family and close friends misjudged their man, as they and the nation would learn in time. With a painstaking reexamination of original documents, James Tobin uncovers the twisted chain of accidents that left FDR paralyzed; he reveals how polio recast Roosevelt's fateful partnership with his wife, Eleanor; and he shows that FDR's true victory was not over paralysis but over the ancient stigma attached to the crippled. Tobin also explodes the conventional wisdom of recent years--that FDR deceived the public about his condition. In fact, Roosevelt and his chief aide, Louis Howe, understood that only by displaying himself as a man who had come back from a knockout punch could FDR erase the perception that had followed him from childhood--that he was a pampered, too smooth pretty boy without the strength to lead the nation. As Tobin persuasively argues, FDR became president less in spite of polio than because of polio. The Man He Became affirms that true character emerges only in crisis and that in the shaping of this great American leader character was all.