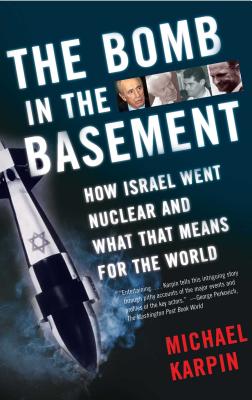 The Bomb in the Basement (Paperback)

How Israel Went Nuclear and What That Means for the World

As Iran continues to develop its nuclear program and explicitly denounces Israel, Michael Karpin's The Bomb in the Basement provides important context for the ongoing tensions in the Middle East.

After Israel won its war of independence in 1948, founding prime minister David Ben-Gurion realized that his country faced the possibility of having to fight Arab nations again in the future. He embraced the idea of developing a nuclear capability and put a young lieutenant, Shimon Peres, in charge of the project. This was the beginning of Israel's quest for nuclear capability, a project that could not have happened without the cooperation of the French. In The Bomb in the Basement, journalist Michael Karpin gives us the most complete account of how Israel became the Middle East's only nuclear power and how its status as an officially unacknowledged nuclear nation affects the politics of that volatile region.

Karpin's research includes exclusive interviews that provide new insights into the key figures behind the program (notably a harsh rivalry between Peres and Isser Harel, the first head of Mossad). He explains how different U.S. administrations have dealt with Israel's nuclear status, from Eisenhower's disapproval to Johnson's open support. And he shows how the key to Israel's nuclear capability has been its policy of "nuclear ambiguity."

A compelling account of a complicated history, The Bomb in the Basement raises provocative questions about how Israel's nuclear arsenal may affect not only its own future, but the future of the entire Middle East.

Michael Karpin has been an Israeli television and radio news reporter, anchor, and foreign bureau chief in Bonn and Moscow. More recently he has produced television documentaries, including one that was the genesis of this book. He lives in Jerusalem.

Praise For The Bomb in the Basement: How Israel Went Nuclear and What That Means for the World…

"Provides the most comprehensive and illuminating account of Israel's path and its policy of 'strategic ambiguity' about nuclear weapons."

"Entertaining.... Karpin tells this intriguing story through pithy accounts of the major events and profiles of the key actors."