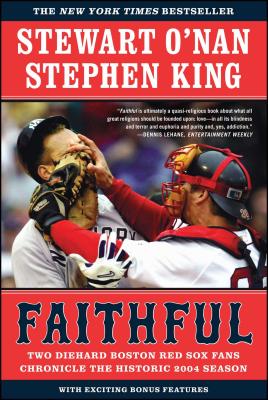 “Faithful isn't just about the Red Sox. It's also about family, friendship, and what it truly means to be a baseball fan and to be—well, faithful, come hell or high water” (The Boston Globe).

“Of all the books that will examine the Boston Red Sox's stunning come-from-behind 2004 ALCS win over the Yankees and subsequent World Series victory, none will have this book's warmth, personality, or depth” (Publishers Weekly).

Early in 2004, two writers and Red Sox fans, Stewart O'Nan and Stephen King, decided to chronicle the upcoming season, one of the most hotly anticipated in baseball history. They would sit together at Fenway. They would exchange emails. They would write about the games. And, as it happened, they would witness the greatest comeback ever in sports, and the first Red Sox championship in eighty-six years. What began as a Sox-filled summer like any other is now a fan's notes for the ages.

"Faithful isn't just about the Red Sox. It's also about family, friendship, and what it truly means to be a baseball fan and to be -- well, faithful, come hell or high water....The season was full of priceless moments, and King and O'Nan catch nearly all of them in amber."
-- Frank Mosher, The Boston Globe

"King and O'Nan are the kind of fans who make for great baseball companions: know-ledgeable, opinionated, funny, and irreverent."
-- Bob Minzesheimer, USA Today

"Faithful is ultimately a quasi-religious book about what all great religions should be founded upon: love -- in all its blindness and terror and euphoria and purity and, yes, addiction."
-- Dennis Lehane, Entertainment Weekly

Stewart O’Nan’s award-winning fiction includes Snow Angels, A Prayer for the Dying, Last Night at the Lobster, and Emily, Alone. His most recent novel, The Odds, was hailed by The Boston Globe as “a gorgeous fable, a stunning meditation and a hope-filled Valentine.” Granta named him one of America’s Best Young Novelists. He was born and raised and lives in Pittsburgh.