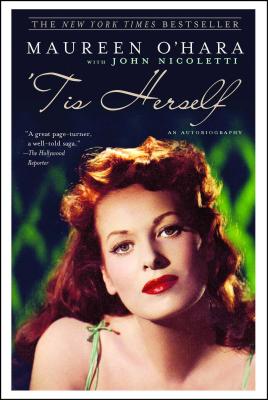 A first-ever, revealing and candid look at the life and career of one of Hollywood’s brightest and most beloved stars, Maureen O’Hara .

In an acting career of more than seventy years, Hollywood legend Maureen O’Hara came to be known as “the queen of Technicolor” for her fiery red hair and piercing green eyes. She had a reputation as a fiercely independent thinker and champion of causes, particularly those of her beloved homeland, Ireland. In ‘Tis Herself, O’Hara recounts her extraordinary life and proves to be just as strong, sharp, and captivating as any character she played on-screen.

O’Hara was brought to Hollywood as a teenager in 1939 by the great Charles Laughton, to whom she was under contract, to costar with him in the classic film The Hunchback of Notre Dame. She has appeared in many other classics, including How Green Was My Valley, Rio Grande, The Quiet Man, and Miracle on 34th Street. She recalls intimate memories of working with the actors and directors of Hollywood’s Golden Age, including Laughton, Alfred Hitchcock, Tyrone Power, James Stewart, Henry Fonda, and John Candy. With characteristic frankness, she describes her tense relationship with the mercurial director John Ford, with whom she made five films, and her close lifelong friendship with her frequent costar John Wayne. Successful in her career, O’Hara was less lucky in love until she met aviation pioneer Brigadier General Charles F. Blair, the great love of her life, who died in a mysterious plane crash ten years after their marriage.

Candid and revealing, ‘Tis Herself is an autobiography as witty and spirited as its author.

Maureen O'Hara has starred in more than sixty motion pictures. She divides her time between the United States, Ireland, and St. Croix in the U.S. Virgin Islands.

Johnny Nicoletti is an author, actor, and talent manager. Most notably, he is the coauthor of the New York Times bestseller ‘Tis Herself, a memoir by Hollywood screen legend Maureen O’Hara. He lives in Los Angeles with his wife and two children. Visit his social learning website at HipNoggin.com and acting bio at IMDB.me/JohnnyNicoletti.

Praise For 'Tis Herself: An Autobiography…

"A great page-turner, a well-told saga."
-- The Hollywood Reporter

"Lots of revealing, candid moments from inside Hollywood."
-- The Atlanta Journal-Constitution