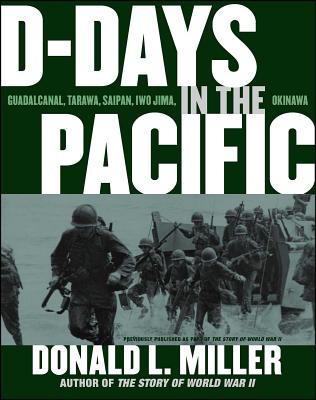 D-Days in the Pacific (Paperback)

Although most people associate the term D-Day with the Normandy invasion on June 6, 1944, it is military code for the beginning of any offensive operation. In the Pacific theater during World War II there were more than one hundred D-Days. The largest—and last—was the invasion of Okinawa on April 1, 1945, which brought together the biggest invasion fleet ever assembled, far larger than that engaged in the Normandy invasion.

D-Days in the Pacific tells the epic story of the campaign waged by American forces to win back the Pacific islands from Japan. Based on eyewitness accounts by the combatants, it covers the entire Pacific struggle from the attack on Pearl Harbor to the dropping of atomic bombs on Hiroshima and Nagasaki. The Pacific war was largely a seaborne offensive fought over immense distances. Many of the amphibious assaults on Japanese-held islands were among the most savagely fought battles in American history: Guadalcanal, Tarawa, Saipan, New Guinea, Peleliu, Leyte Gulf, Iwo Jima, Okinawa.

Generously illustrated with photographs and maps, D-Days in the Pacific is the finest one-volume account of this titanic struggle.

Donald L. Miller is the John Henry MacCracken Professor of History Emeritus at Lafayette College and author of ten books, including Vicksburg, and Masters of the Air, currently being made into a television series by Tom Hanks. He has hosted, coproduced, or served as historical consultant for more than thirty television documentaries and has written for The New York Times, The Washington Post, and other publications.
or
Not Currently Available for Direct Purchase
Copyright © 2020 American Booksellers Association