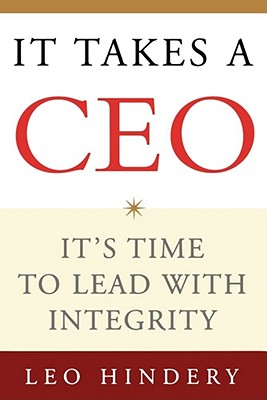 It Takes a CEO

It's Time to Lead with Integrity

Should CEOs act as moral compasses for their companies? Leo Hindery thinks they should. If every CEO did so, then Enron, WorldCom, Adelphia, and Tyco would not have become poster children for greed. They would not have become corporate embarrassments -- living illustrations of all that can go wrong in the corner office.
How did these once prestigious companies fall off the ethical cliff? How is it that reputations were destroyed, shareholders lost value, employees (in many cases) lost everything, and, in a few cases, entire companies disappeared? Everyone is pointing fingers, and the new widespread mistrust of public companies may turn out to be more damaging to America's economic future than the billions actually lost in the scandals.
Now, one of America's most prominent corporate leaders illuminates the need for more integrity and less greed among executives. In a scathing examination of why leaders have lost their way, Leo Hindery speaks out on the role of the CEO.
Does the corporate culture have to be driven by greed? Or can you do good and still make good in the big business world? Leo Hindery, the former CEO and President of companies such as AT&T Broadband, TCI, and the YES Network -- and currently Managing Partner of InterMedia Partners -- forcefully advocates approaching a business career as life's meaningful work, and not merely as a way to accumulate personal wealth. Both fiery and optimistic, Hindery calls upon his fellow executives to conduct themselves with the kind of integrity that used to be commonplace, but now seems all too rare.
Holding his moral yardstick up to some of the worst transgressions in recent memory, Hindery tackles the toughest issues of the day head-on:
- Why should the ratio of average CEO pay to average employee pay today be 304:1 -- and in some cases, as high as 2,300:1?
- What does it mean when 80 percent of all viewed media content is owned by just 5 companies?
- If offshoring is good for the global economy, what needs to be done to make it fair?
- What should the role of the board of directors be, and whose job is it to take care of employees?
With passion, insight, and humor, Hindery reinvigorates the code of business conduct. It Takes a CEO is a corporate handbook for our times -- not for how to get ahead, but for how to lead with integrity, grace, and heart.

Leo Hindery, Jr., is Managing Partner of InterMedia Partners, a major private equity firm. Prior to starting InterMedia Partners, Hindery was CEO of the YES Network, the nation's premier regional sports network, which he helped form in the summer of 2001 as the television home of the New York Yankees and the New Jersey Nets. Previously he has been Chariman and CEO of GlobalCenter Inc., President and CEO of AT&T Broadband, and President and CEO of Tele-Communications, Inc. (TCI). Hindery is the author of The Biggest Game of All. He lives in New York City
Loading...
or support indie stores by buying on