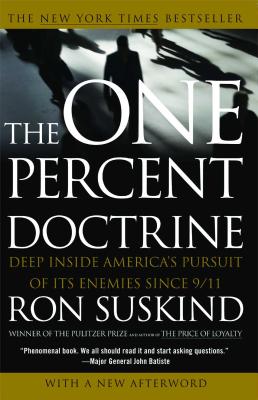 The One Percent Doctrine

Deep Inside America's Pursuit of Its Enemies Since 9/11

Pulitzer Prize-winning journalist and bestselling author Ron Suskind takes you deep inside America's real battles with violent, unrelenting terrorists—a game of kill-or-be-killed, from the Oval Office to the streets of Karachi.

Ron Suskind takes readers inside the defining conflict of our era: the war between the West and a growing, shadowy army of terrorists, armed with weapons of alarming power.

Relying on unique access to former and current government officials, this book will reveal for the first time how the US government—from President Bush on down—is frantically improvising to fight a new kind of war. Where is the enemy? What have been the real victories and defeats since 9/11? How are we actually fighting this war and how can it possibly be won?

Filled with astonishing disclosures, Suskind's book shows readers what he calls "the invisible battlefield"— a global matrix where US spies race to catch soldiers of jihad before they strike. It is a real-life spy thriller with the world's future at stake. It also reveals the shocking and secret philosophy underpinning the war on terror. Gripping and alarming in equal measure, it will reframe the debate about a war that, each day, redefines America and its place in the world.

Praise For The One Percent Doctrine: Deep Inside America's Pursuit of Its Enemies Since 9/11…

"Phenomenal book. We all should read it and start asking questions." -- Major General John Batiste

"This is an important book, filled with the surest sign of great reporting: the unexpected. It enriches our understanding of even familiar episodes from the Bush administration's war on terror and tells us some jaw-dropping stories we haven't heard before." -- Barton Gellman, The Washington Post

"Riveting.... Sheds new light on the Bush White House's strategic thinking and its doctrine of pre-emptive action, but also underscores the roles that personality and ideology played in shaping the administration's decision to go to war in Iraq." -- Michiko Kakutani, The New York Times

"A richly detailed and layered account.... It makes for deeply unsettling reading and is a major contribution to our national conversation.... [Suskind] is a gifted and enterprising reporter and those attributes inform nearly every part of this important book.... Compelling." -- Tim Rutten, Los Angeles Times

"If Bob Woodward is the chronicler of the Bush administration, Ron Suskind is its analyst.... A page-turning, blow-by-blow, inside-the-administration account.... Historians will be grateful for it as they write the many final drafts in the decades to come." -- Michael Hill, The Baltimore Sun

"Suskind's great achievement here is to reveal how the Bush administration short-circuited and ultimately corrupted the way America's government is supposed to work." -- Gary Kamiya, Salon.com

Ron Suskind is the author of the # 1 New York Times bestseller The Price of Loyalty: George W. Bush, the White House, and the Education of Paul O'Neill. He is also the author of the critically acclaimed A Hope in the Unseen. He has been senior national affairs reporter for The Wall Street Journal, where he won the Pulitzer Prize for Feature Writing. Visit the author's website at www.ronsuskind.com.
Loading...
or support indie stores by buying on