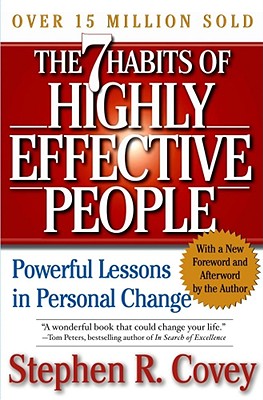 In The 7 Habits of Highly Effective People, author Stephen R. Covey presents a holistic, integrated, principle-centered approach for solving personal and professional problems. With penetrating insights and pointed anecdotes, Covey reveals a step-by-step pathway for living with fairness, integrity, service, and human dignity -- principles that give us the security to adapt to change and the wisdom and power to take advantage of the opportunities that change creates.

The late Skip LeFauve President, Saturn Corporation/General Motors Stephen Covey's The 7 Habits of Highly Effective People played a major role in the development of Saturn's operating systems and philosophy. Our commitment to quality and to our customers has its roots in The 7 Habits.

Ken M. Radziwanowski AT&T School of Business Picture someone going through the best experience they've ever had in terms of training -- that's what they say. People credit the 7 Habits with changing their lives, with getting back on track personally and professionally.
or
Not Currently Available for Direct Purchase
Copyright © 2020 American Booksellers Association