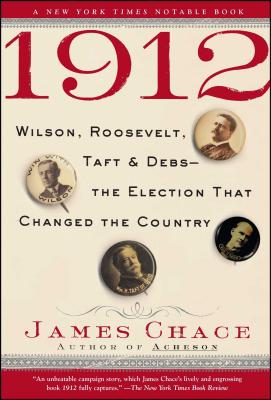 Wilson, Roosevelt, Taft and Debs--The Election that Changed the Country

When Roosevelt failed to defeat his chosen successor, William Howard Taft, for the Republican nomination, he ran as a radical reformer on the Bull Moose ticket. Meanwhile, Woodrow Wilson, the ex-president of Princeton, astonished everyone by seizing the Democratic nomination from the bosses who had made him New Jersey’s governor. Most revealing of the reformist spirit sweeping the land was the charismatic socialist Eugene Debs, who polled an unprecedented one million votes.

Wilson’s “accidental” election had lasting impact on America and the world. The broken friendship between Taft and TR inflicted wounds on the Republican Party that have never healed, and the party passed into the hands of a conservative ascendancy that reached its fullness under Reagan and George W. Bush. Wilson’s victory imbued the Democratic Party with a progressive idealism later incarnated in FDR, Truman, and LBJ.

Praise For 1912: Wilson, Roosevelt, Taft and Debs--The Election that Changed the Country…

"A brisk, consistently entertaining narrative that is alive both to politics and personality."
-- Michael Kazin, Washington Post Book World

James Chace was the Paul W. Williams Professor of Government and Public Law at Bard College. The former managing editor of Foreign Affairs and the author of eight previous books, most recently Acheson, he passed away in October 2004.
Loading...
or support indie stores by buying on