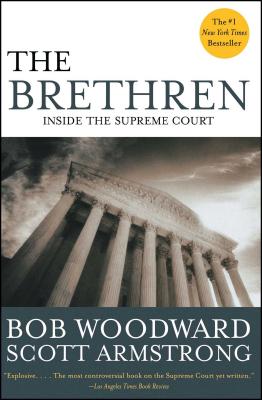 Inside the Supreme Court

The Brethren is the first detailed behind-the-scenes account of the Supreme Court in action.

Bob Woodward and Scott Armstrong have pierced its secrecy to give us an unprecedented view of the Chief and Associate Justices—maneuvering, arguing, politicking, compromising, and making decisions that affect every major area of American life.

Praise For The Brethren: Inside the Supreme Court…

"Fascinating. The pace is swift, with details that rivet the attention."
-- The Washington Post Book World

"A provocative book about a hallowed institution...It is the most comprehensive inside story ever written of the most important court in the world. For this reason alone it is required reading."
-- BusinessWeek

"It is to the credit of Woodward and Armstrong that they were willing -- and able -- to shatter this conspiracy of silence. It is certainly in the highest tradition of investigative journalism."
-- Saturday Review

"One hell of a reporting achievement."
-- The Village Voice

Scott Armstrong is executive director of the Information Trust. A former reporter for The Washington Post, he founded the National Security Archive and was a senior investigator for the Senate Watergate Committee.
Loading...
or support indie stores by buying on