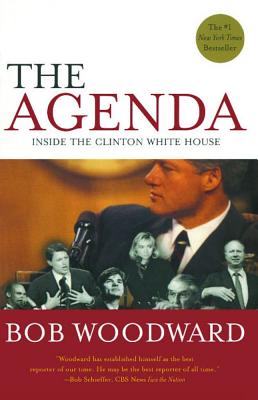 Inside the Clinton White House

The Agenda is a day-by-day, often minute-by-minute account of Bill Clinton's White House. Drawing on hundreds of interviews, confidential internal memos, diaries, and meeting notes, Woodward shows how Clinton and his advisers grappled with questions of lasting importance -- the federal deficit, health care, welfare reform, taxes, jobs. One of the most intimate portraits of a sitting president ever published, this edition includes an afterword on Clinton's efforts to save his presidency.

Praise For The Agenda: Inside the Clinton White House…

"A triumph of the reporter's art."
-- The Washington Post Book World

"As always, Woodward...displays an amazing ability to get his sources to say things they shouldn't."
-- BusinessWeek

"The Agenda is a great read.... The pace is fast, the quotes are crisp, and the scenes are often dramatic.... Spellbinding political drama."
-- The Philadelphia Inquirer