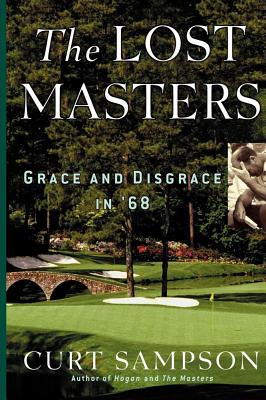 Grace and Disgrace in '68

Of all the games ever played in a sporting competition, never has an event been so bizarre and yet so fitting for its historical moment: the 1968 Masters.

Anger gripped America's heart in April 1968. Vietnam and a bitter presidential contest sharpened the divides between races and generations, while protests and violence poisened the air. Then an assassin's bullet took the life of Dr. Martin Luther King, Jr. Cities burned.
The smoke had barely cleared when the Masters began.
Never was the country more ready for distraction and escape--but could the orderly annual excitement of Palmer versus Nicklaus provide it? For a while, it could and it did--except that instead of a duel between golf's superstars, several unlikely members of the chorus stepped forward with once-in-a-lifetime performances. There was blunt-talking Bob Goalby, a truck driver's son from Illinois and former star football player; loveable Roberto De Vicenzo from Argentina, who charmed the galleries and media all week; and Bert Yancey, a Floridian who'd dropped out of West Point to face his private demons of mental illness.
Just as the competition reached a thrilling crescendo, it all fell apart. The Masters, the best-run tournament in the world, devolved into a heart-wrenching tangle of rules, responsibility, and technicality. In a fascinating narrative that stops in Augusta, Buenos Aires, and Belleville, Illinois, bestselling author Curt Sampson finds the truth behind The Lost Masters. It's a story you'll never forget.