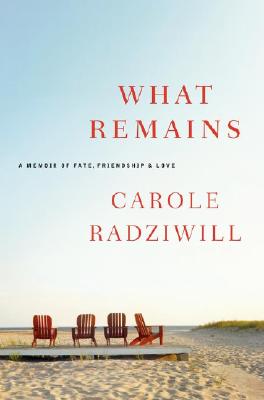 A Memoir of Fate, Friendship, and Love

"What Remains" is a vivid and haunting memoir about a girl from a working-class town who becomes an award-winning television producer and marries a prince, Anthony Radziwill, one of a long line of Polish royals and nephew of President John F. Kennedy. Carole Radziwill's story is part fairy tale, part tragedy. She tells both with great candor and wit.

Carole grew up in a small suburb with a large, eccentric cast of characters. She spent her childhood summers with her grandparents and an odd assortment of aunts and uncles in their poorly plumbed A-frame on the banks of a muddy creek in upstate New York.

At the age of nineteen, Carole struck out for New York City to find a different life. Her career at ABC News led her to the refugee camps of Cambodia, to a bunker in Tel Aviv, to the scene of the Menendez murders. Her marriage led her into the old world of European nobility and the newer world of American aristocracy.

"What Remains" begins with loss and returns to loss. A small plane plunges into the ocean, carrying John Kennedy, Anthony's cousin, and Carolyn Bessette Kennedy, Carole's closest friend. Three weeks later Anthony dies of cancer. The summer of the plane crash, the four friends were meant to be cherishing Anthony's last days. Instead, Carole and Anthony mourned John and Carolyn, even as Carole planned her husband's memorial.

Carole Radziwill has an anthropologist's sensibility and a journalist's eye. She writes about families--their customs, their secrets, and their tangled intimacies-- with remarkable acuity and humanity. She explores the complexities of marriage, the importance of friendship, and the challenges of self-invention with unflinching honesty. This is acompelling story of love, loss, and, ultimately, resilience.