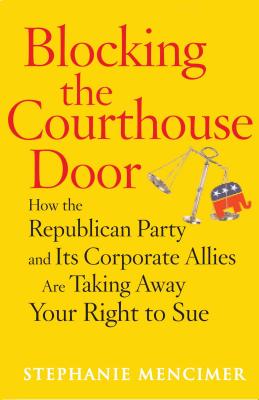 Thanks to constant political oratory against "frivolous lawsuits" and "jackpot justice," it is widely known that there's a legal crisis in this country. President Bush never misses an opportunity to call for laws that would bring more "common sense" to a legal system that, he claims, is out of control, wrecking the economy, driving doctors out of their practices, bankrupting small businesses, and costing American jobs. Journalists repeat the charges without examining them.

As a result, the lawsuit issue has moved to the political front burner, and in the past three years, state after state has responded by limiting citizens' rights to sue. Just this year alone, the Republicanled Congress has passed restrictions on class action lawsuits and is steps away from enacting limits on medical malpractice lawsuits.

But is there really a crisis? National data show that the number of civil suits is falling, not rising, and that the average damage award is also going down. Despite intense media hype to the contrary, the number of personal injury lawsuits filed every year has been tumbling for the past decade. Upon closer examination, the stories of ridiculous lawsuits usually turn out to be false or badly misleading. The crisis, in short, appears to be a phantom.

So how do we explain the scary headlines? Who's behind the "tort reform movement," and what are the real goals? "Blocking the Courthouse Door" will show that the movement against so-called greedy trial lawyers and irresponsible plaintiffs is the result of a concerted and successful campaign by large corporations to get this issue on the table and thus limit their own vulnerability in the civil justice system. They have spent decades, and many millions of dollars, on focus groups and Madison Avenue public relations research. They have funded institutes, sponsored academic research, bankrolled politicians, set up phony "astroturf " grassroots organizations (with chamber of commerce return addresses), and fed copy to all-too-gullible journalists.

For corporations, the self-interest involved is fairly plain. Tobacco companies, no longer able to dodge the bullet of liability for knowingly selling poisons, are making an end run around the civil justice system. If they can't win a class action suit, they'll make suing itself illegal. Insurance companies, drowning in red ink from mismanagement and bad investments in the bond market, hike insurance rates by huge sums and blame malpractice suits. The doctors in turn blame greedy lawyers -- and their own injured patients. And for Republicans, the campaign provides an extra bonus: defunding the Democratic Party. Limits on lawsuits cut into the income of some of the Democratic Party's most generous donors, the trial lawyers, who are often the only source of campaign cash for Democrats in many states.

By exposing some of the dubious characters, corporate chicanery, skewed research, fudged numbers, and bogus journalism that have buttressed the calls for lawsuit reform, Stephanie Mencimer shows who's behind the movement to close the courthouse doors, and how they've successfully persuaded millions of Americans to give up their critical legal rights without fully understanding what they're losing -- often until it's too late.


Praise For Blocking the Courthouse Door: How the Republican Party and Its Corporate Allies Are Taking Away Your Right to Sue…

"The great American civil justice system -- a major pillar of our democracy -- is under relentless assault by the corporate wrongdoers' lobby. Blocking the Courthouse Door irrefutably exposes their power, money, lies, and propaganda geared to destroying judicial justice for wrongfully injured people. This book educates and activates fighting back." -- Ralph Nader

"Mencimer's book is a tonic for anyone who's ever heard the words 'tort reform' and lapsed into a guilty stupor. Blocking the Courthouse Door deftly illustrates how the big business and big government that fuel and feed litigation reform have -- surprise -- also reaped all the benefits of litigation reform. Mencimer proves that scrupulous legal reporting can result in an accessible page-turner. She reminds us that if we turn a blind eye while they're robbing the little guy of his day in court, the courts become a playground for the big guy." -- Dahlia Lithwick, senior and legal correspondent, Slate

"Blocking the Courthouse Door is a must-read for every American. Mencimer makes the case with power and merit that unless we act, one of the fundamental tenets of our liberty -- access to justice -- may not survive this generation. " -- Jan Schlichtmann, plaintiffs' lawyer in Jonathan Harr's A Civil Action