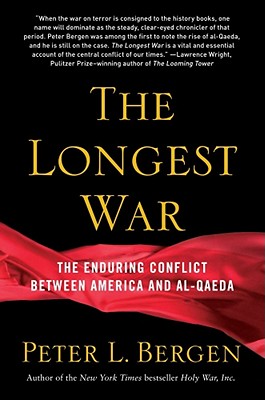 TEN YEARS HAVE PASSED since the shocking attacks on the World Trade Center, and after seven years of conflict, the last U.S. combat troops left Iraq—only to move into Afghanistan, where the ten-year-old fight continues: the war on terror rages with no clear end in sight. In The Longest War Peter Bergen offers a comprehensive history of this war and its evolution, from the strategies devised in the wake of the 9/11 attacks to the fighting in Afghanistan, Pakistan, and beyond. Unlike any other book on this subject, here Bergen tells the story of this shifting war’s failures and successes from the perspectives of both the United States and al-Qaeda and its allies. He goes into the homes of al-Qaeda members, rooting into the source of their devotion to terrorist causes, and spends time in the offices of the major players shaping the U.S. strategic efforts in the region. At a time when many are frustrated or fatigued with what has become an enduring multigenerational conflict, this book will provide an illuminating narrative that not only traces the arc of the fight but projects its likely future.

Praise For The Longest War: The Enduring Conflict between America and Al-Qaeda…

"For readers interested in a highly informed, wide-angled, single-volume briefing on the war on terror so far, The Longest War is clearly that essential book."--Michiko Kakutani, The New York Times

“For years, I tried to read every new novel about how 9/11 affected our lives. Some were very thoughtful, but I always came away unsatisfied, feeling that the authors had worked hard but had somehow fallen short. As I read the stunning first section of Peter L. Bergen’s new book on the war between the United States and Al Qaeda, I realized I had been looking in the wrong genre. None of the novels were as effective or moving as “The Longest War,” which is a history of our time. … “The Longest War” is one of the most important accounts on the subject to appear in years. But be warned: You will read it and weep.”
–Thomas E. Ricks, The New York Times Book Review

“His important history of the war on terrorism….The greatest strength of The Longest War is that it provides a detailed history of what has occurred since al-Qaeda first appeared on the terrorist scene. Uniquely, it tells the history from three sides: the Americans involved in prosecuting the war; ordinary Muslims, the vast majority of whom remain unmoved by bin Laden's siren call; and the many terrorists and sympathizers whom Bergen has sought out in the field or whose voluminous writings he expertly synthesizes. The Longest War is also a very good read.”--Washington Post

“The Longest War is ambitious both in scope and aims…you need to understand al-Qaida, and Bergen, with this detailed, serious, scrupulously fair, perceptive and sometimes startling work has made a significant contribution to us doing exactly that.”--The Guardian

”The Longest War is by far the best and most comprehensive book on the conflict so far.”--Sunday Times

“A grippingly important work that belongs on the shelf alongside The Looming Tower and Ghost Wars.”---The Daily Beast

"The Longest War is his history of a daunting subject that succeeds where other books have failed. That's because the author was one of the few people onto al-Qaeda years before the instant experts cropped up. And he is still there watching, long after most of those so-called experts packed it in and moved on."--The Globe and Mail

“A revelatory, pull-no-punches history of the War on Terror, from before 9/11 to the present day…One of the deepest and most disturbing investigations of one of the defining issues of our era.”—Kirkus, starred review

“Drawing on vast firsthand knowledge of the region and mining a huge stock of primary and secondary material, including his own interviews with combatants, the book’s depth of detail and breadth of insight make it one of the more useful analysis of the ongoing conflict.”—Publishers Weekly, starred review

‘In The Longest War Bergen attempts to provide us with an overarching narrative of the first ten years of the epic struggle that resulted from the 9/11 attacks, and he does an admirable job of it.” –Christian Caryl, The Washington Monthly

“[a] readable and well-reported appraisal”—The Economist

“"The Longest War" is a useful synopsis of the struggle we've come to call the war on terror, and he chronicles it with the keen eye of an experienced journalist and on-the-ground observer. Bergen, who actually has interviewed Bin Laden and is the author of two books on him, gives a particularly good view of Al Qaeda’s operative behavior — it’s much more bureaucratic than you might imagine — as well as a gripping re-creation of what went wrong at Tora Bora, the last opportunity the U.S. had to apprehend or kill Bin Laden.” –LA Times

“Peter Bergen has long since established himself as America’s most authoritative and insightful analyst on Osama bin Laden and al-Qaeda, and time and again has given the nation an unblinking glimpse into the mind of the enemy. Now, with The Longest War, he has performed perhaps his greatest public service with what is certainly the finest comprehensive history of the war on terror yet written. Weaving together the wars in Iraq, Afghanistan, and the broader anti-terror campaigns of Bush and Obama, he does something nearly impossible. He explains how we got here from 9/11.”
--James Risen, author of State of War: The Secret History of the CIA and the Bush Administration

“When the War on Terror is consigned to the history books, one name will dominate as the steady, clear-eyed chronicler of that period. Peter Bergen was among the first to note the rise of al-Qaeda, and he is still on the case. The Longest War is a vital and essential account of the central conflict of our times.”
--Lawrence Wright, author of The Looming Tower: Al-Qaeda and the Road to 9/11

“Peter Bergen’s The Longest War is indispensable history. Authoritative and ambitious, it provides a damning account of the fitful fight against Islamic terrorism that every American should read.”
—Jane Mayer, author of The Dark Side: How the War on Terror Turned Into a War on American Ideals

"Peter Bergen has produced a masterful, definitive assessment of Al-Qaeda and America since September 11 - rich with new details, elevated by careful analysis, and quickened by riveting characters and stories. This is essential reading."--Steve Coll, two-time Pulitzer Prize winning author of Ghost Wars and The Bin Ladens