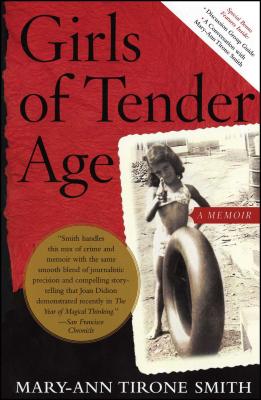 In Girls of Tender Age, Mary-Ann Tirone Smith fully articulates with great humor and tenderness the wild jubilance of an extended French-Italian family struggling to survive in a post-World War II housing project in Hartford, Connecticut. Smith seamlessly combines a memoir whose intimacy matches that of Angela's Ashes with the tale of a community plagued by a malevolent predator that holds the emotional and cultural resonance of The Lovely Bones. Smith's Hartford neighborhood is small-town America, where everyone's door is unlocked and the school, church, library, drugstore, 5 & 10, grocery, and tavern are all within walking distance. Her family is peopled with memorable characters--her possibly psychic mother who's always on the verge of a nervous breakdown, her adoring father who makes sure she has something to eat in the morning beyond her usual gulp of Hershey's syrup, her grandfather who teaches her to bash in the heads of the eels they catch on Long Island Sound, Uncle Guido who makes the annual bagna cauda, and the numerous aunts and cousins who parade through her life with love and food and endless stories of the old days. And then there's her brother, Tyler. Smith's household was "different." Little Mary-Ann couldn't have friends over because her older brother, Tyler, an autistic before anyone knew what that meant, was unable to bear noise of any kind. To him, the sound of crying, laughing, phones ringing, or toilets flushing was "a cloud of barbed needles" flying into his face. Subject to such an assault, he would substitute that pain with another: he'd try to chew his arm off. Tyler was Mary-Ann's real-life Boo Radley, albeit one whose bookshelves sagged under the weight of the World War II books he collected and read obsessively. Hanging over this rough-and-tumble American childhood is the sinister shadow of an approaching serial killer. The menacing Bob Malm lurks throughout this joyous and chaotic family portrait, and the havoc he unleashes when the paths of innocence and evil cross one early December evening in 1953 forever alters the landscape of Smith's childhood. Girls of Tender Age is one of those books that will forever change its readers because of its beauty and power and remarkable wit.

Praise For Girls of Tender Age: A Memoir…

"Like David Lynch's Blue Velvet, Girls of Tender Age peers into the dark spaces between the streetlights in a quiet residential neighborhood. Something sinister lurks just off the page, and it creeps closer and closer until the memoir's two story lines twist together. . . . Smith's deadpan delivery and comedic timing give the narrative spark."

"A riveting memoir that encompasses the murder of a schoolmate by a pedophile and life with a brother who suffered from autism."

"This beautiful memoir succeeds not only in recovering the author's past, but also in uncovering and ordering the few sordid facts of the crime and creating a narrative where one was not allowed to exist. . . . Riveting and suspenseful."

"With intelligence, disarming humor, and deep affection for the families and the neighborhoods of the 1950s, Girls of Tender Age speaks eloquently on behalf of children and confronts the crippling silences that damage us in any era."

"Smith handles this mix of crime and memoir with the same smooth blend of journalistic precision and compelling story-telling that Joan Didion demonstrated recently in The Year of Magical Thinking."