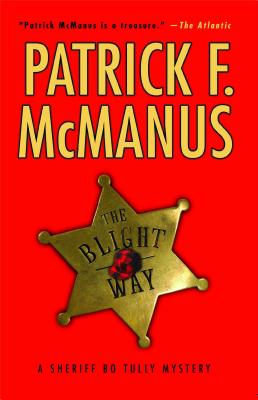 Bo Tully, sheriff of Blight County, Idaho—and a fellow who dropped twenty pounds on Atkins—had been thinking about asking out Jan Whittle, his grade-school sweetheart. Problem is, he’s already promised to celebrate his dad’s seventy-fifth birthday with him. Thwarted romance proves to be the least of Bo’s problems, however, when a dead body turns up on Batim Scragg’s ranch. Forced to put on his sleuthing hat, Bo finds himself faced with a whole slew of possible suspects. And what quickly becomes apparent is that, while the sheriff’s investigative methods may not exactly be legal, they are, for better or worse, The Blight Way.

A bestselling author with more than two million books in print, the curmudgeonly wit Patrick F. McManus delivers a page-turning mystery filled with mirth and misadventure set in hook-and-bullet territory.

Praise For The Blight Way: A Sheriff Bo Tully Mystery…

"Everybody should read Patrick McManus."

"Patrick Mc Manus is a treasure."

Patrick F. McManus is a renowned outdoor writer, humorist, and longtime columnist for Outdoor Life and Field & Stream. His most recent Sheriff Bo Tully mysteries are The Double-Jack Murders and Avalanche. He is the author of many other books, including such runaway New York Times bestsellers as The Grasshopper Trap, The Night the Bear Ate Goombaw, and Real Ponies Don't Go Oink! He lives in Spokane, Washington.
Loading...
or support indie stores by buying on