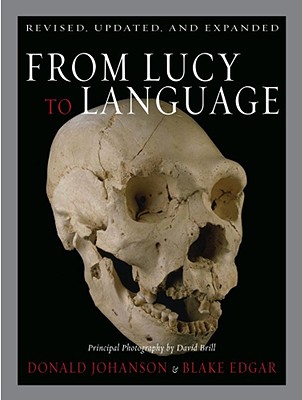 From Lucy to Language (Hardcover)

In 1974 in a remote region of Ethiopia, Donald Johanson, then one of America's most promising young paleoanthropologists, discovered "Lucy," the oldest, best preserved skeleton of any erect-walking human ever found. This discovery prompted a complete reevaluation of previous evidence for human origins. In the years since this dramatic discovery Johanson has continued to scour East Africa's Great rift Valley for the earliest evidence of human origins. In 1975 this team unearthed the "First Family," an unparalleled fossil assemblage of 13 individuals dating back to 3.2 million years ago; and in 1986 at the Rift's most famous location, Olduvai Gorge, this same team discovered a 1.8 million-year-old partial adult skeleton that necessitated a reassessment of the earliest members of our own genus Homo. Johanson's fieldwork continues unabated and recently more fossil members of Lucy's family have been found, including the 1992 discovery of the oldest, most complete skull of her species, with future research now planned for 1996 in the virtually unexplored regions of the most northern extension of the Rift Valley in Eritrea. From Lucy to Language is a summing up of this remarkable career and a stunning documentary of human life through time on Earth. It is a combination of the vital experience of field work and the intellectual rigor of primary research. It is the fusion of two great writing talents: Johanson and Blake Edgar, an accomplished science writer, editor of the California Academy of Sciences' Pacific Discovery, and co-author of Johanson's last book, Ancestors. From Lucy to Language is one of the greatest stories ever told, bracketing the timeline between bipedalism and human language. Part I addresses the central issues facing anyone seeking to decipher the mystery of human origins. In this section the authors provide answers to the basics -- "What are our closest living relatives?" -- tackle the controversial -- "What is race?" -- and contemplate the imponderables -- "Why did consciousness evolve?" From Lucy to Language is an encounter with the evidence. Early human fossils are hunted, discovered, identified, excavated, collected, preserved, labeled, cleaned, reconstructed, drawn, fondled, photographed, cast, compared, measured, revered, pondered, published, and argued over endlessly. Fossils like Lucy have become a talisman of sorts, promising to reveal the deepest secrets of our existence. In Part II the authors profile over fifty of the most significant early human fossils ever found. Each specimen is displayed in color and at actual size, most of them in multiple views. With them the authors present the cultural accoutrements associated with the fossils: stone tools which evidence increasing sophistication over time, the earliest stone, clay, and ivory art objects, and the culminating achievement of the dawn of human consciousness -- the magnificent rock and cave paintings of Europe, Africa, Australia, and the Americas. In the end From Lucy to Language is a reminder and a challenge. Like no species before us, we now seem poised to control vast parts of the planet and its life. We possess the power to influence, if not govern, evolution. For that reason, we must not forget our link to the natural world and our debt to natural selection. We need to "think deep," to add a dose of geologic time and evolutionary history to our perspective of who we are, where we came from, and where we are headed. This is the most poignant lesson this book has to offer.

Donald Johanson has explored the Great Rift Valley of East Africa for more than two decades, seeking clues to our ultimate origins. One of the most lively and controversial scientists working today, he is the author of five previous books, the host of the three-part Nova series In Search of Human Origins, and continues to lecture regularly. Known worldwide for his discovery of the Lucy skeleton, he is founder and president of the Institute of Human Origins in Berkeley, California, where he resides.
or support indie stores by buying on
Copyright © 2020 American Booksellers Association