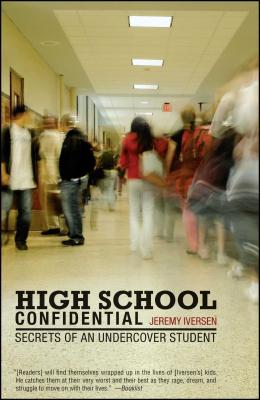 Secrets of an Undercover Student

It's spring semester in Southern California, and twenty-four-year-old Stanford grad Jeremy Iversen is forsaking a dreary future of New York investment banking to go on the adventure of a lifetime. With a new wardrobe and the blessing of the school principal, he transfers into Mirador High, going undercover as a seventeen-year-old surfer.

In this fast-paced exposé, Iversen quickly finds himself climbing the social ladder to the popular crowd, winning over everyone from steroid-raging athletes to shoplifting scene kids, promiscuous prom queens to evangelical Christians. Along the way, he uncovers a secret world of bomb threats and sex videotapes, wildfires and wilder parties, childish teachers and youth growing up way too fast.

But when he finds himself caught between his teenage friends and a jaded administration that will stop at nothing to make their failing school look good, he realizes he faces the hardest choice of his life.

High School Confidential is the explosive true story of a rising generation that proves you can go back again.

Praise For High School Confidential: Secrets of an Undercover Student…

"Shows like Laguna Beach try to expose the shocking reality of teen life, but really nothing could compare to Jeremy Iversen's experience of posing as a student.... It's a fascinating read."

"Iversen's mastery of story made me fall in love with every one of his classmates, and his sense of suspense and timing made me carry this book around for days....Dude. It's like, one of the best books you'll read this year."

"[Readers] will find themselves wrapped up in the lives of [Iversen's] kids. He catches them at their very worst and their best as they rage, dream, and struggle to move on with their lives."

Jeremy Iversen recently graduated from Stanford, where he served as vice-president of Delta Tau Delta fraternity and rush chair for the entire university. After a stint as a runway model, he spent six months undercover in high school, pretending to be a 17-year-old surfer, and wrote about the once-in-a-lifetime experience in his bestselling book High School Confidential. He is currently pursuing a career in acting, and lives in Los Angeles.  Visit him online at www.JeremyIversen.com
Loading...
or support indie stores by buying on